This Edmonton 'news' website gets 5M views a month. So why has no one ever heard of it? 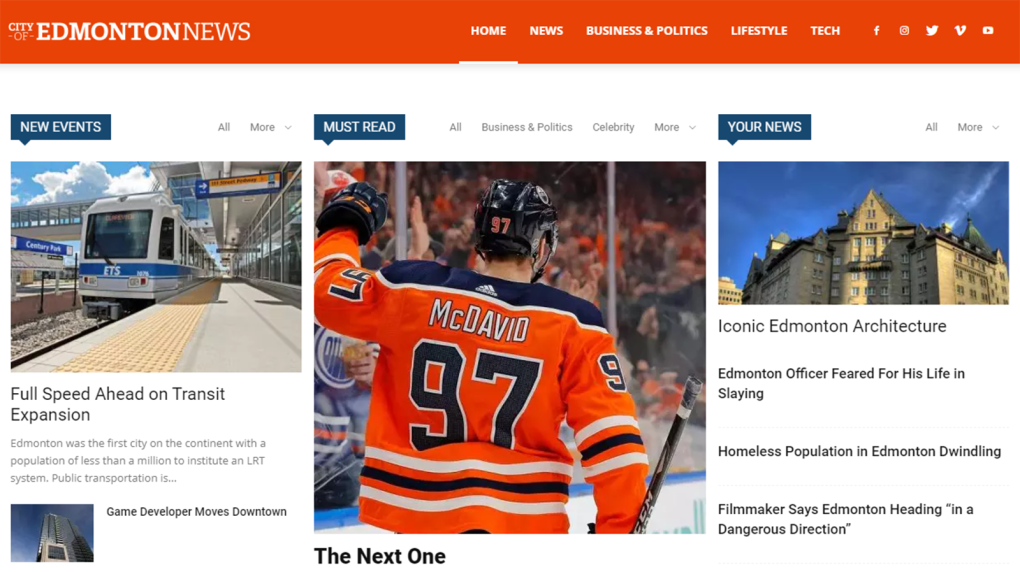 A still taken from the home page of CityOfEdmontonNews.com is shown.

EDMONTON -- Its front page features stories that are more than a year old. Nearly 80 per cent of its traffic comes from the United States. So how did an unheard-of Edmonton web page become the most popular news site in the city?

A new report by an advertising fraud prevention consultant has put a spotlight on CityofEdmontonNews.com, a website created in October 2018.

"In a new era, when local media are experiencing a severe crisis, many of them do not have time to adapt to the digital ecosystem, we see a successful start-up that is gaining a local audience in spite of industry trends," says the report by Social Puncher.

Using data from analytics company SimilarWeb, the report details the website's rise in visitors to one million in March, two million in May and peaking at five million visitors in July.

But of those visiting the site, a whopping 78.95 per cent were from the United States and only 7.54 per cent were in Canada—a strange demographic for an Edmonton-based news website.

By comparison, the City of Edmonton's website only registered an estimated 906,000 visitors last month, with 94 per cent of those clicks coming from within Canada. The province's website, Alberta.ca, received slightly more than 6.3-million visitors in October.

Only 4.63 per cent of City of Edmonton News traffic came from internet searches, while an unusually high 77 per cent of visitors typed in the URL directly.

Of those who did search, what did people type to find the website? SimilarWeb reports that bizarrely, the top referring keyword was "Brendan Fraser," which came up in 22 per cent of searches.

The City of Edmonton News website has not been updated in months. Most stories on the home page do not have a time stamp, but some the events they are based on are months old.

An undated article under the heading "new events" reports that Studio 99 is opening in Rogers Place, but the Edmonton Oilers unveiled the new addition more than a year ago, on Oct. 18, 2018. 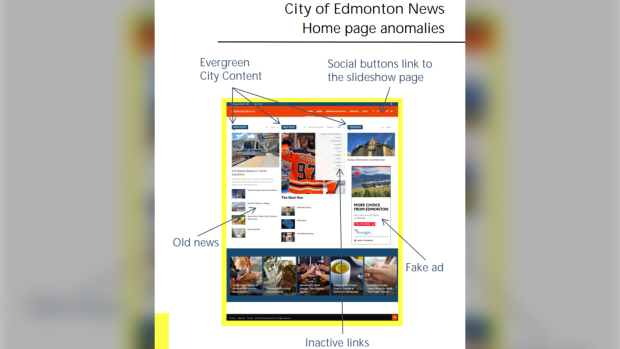 Many of the articles are apparently written by two people, "Ryan Frost" or "Korey," but clicking on the former's name brings you to pages upon pages of articles showing photos of celebrities like Britney Spears "then and now."

The 32 posts written by Korey are largely local Edmonton stories dealing with issues like calcium chloride, train derailments and the recent climate strike march, but a closer look at the article shows they are likely based on other news reports.

The stories don't appear to be directly plagiarized, but use identical quotes from reports by CBC, Global and CTV. An article on an Edmonton plus-size advocate uses quotes from two CBC stories without attributing to the reports they were taken from.

Trying to click on the website's social media links produces another oddity: They all link to a photo gallery of late actress Carrie Fisher.

Report author Vladislav Shevtsov says the site has all the hallmarks of an advertising fraud scheme.

"It's a brilliant and simple example of simulated media," he said. "It's not a fake news site. They mostly use old, real rewritten news and stories, but this site is a simulation of a news outlet."

He said by posing as a legitimate news website and by using bots to inflate its monthly visitor numbers, CityOfEdmontonNews.com appears as an attractive investment for advertisers.

Those companies will likely never know, Shevtsov said. "Advertisers don't look at every media. All advertising now is programmatic," he said, referring to an automated digital advertising system. 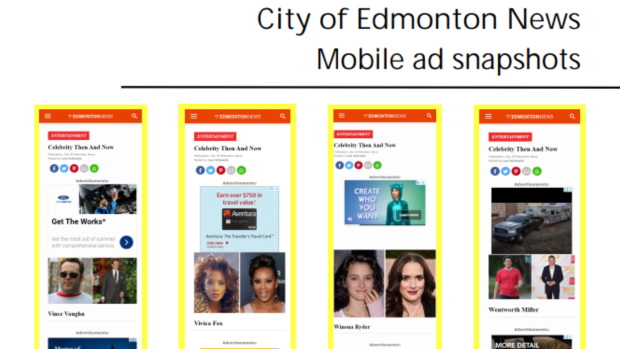 A screenshot from the Social Puncher report shows the high number of ad placements on City of Edmonton News.

Shevtsov pointed to a similar scandal that happened with Myspace, a social network popular in the early 2000s.

When visitor numbers spiked on Myspace two years ago, generating ad revenue, a BuzzFeed News investigation revealed that the traffic came from software that spawned millions of video ad impressions.

Myspace's parent company responded by shutting down the affected video pages and blaming third parties for any fraud.

In the case of City of Edmonton News, Shevtsov said there's no such parent company to answer questions about the site's unusually high traffic.

"Professionals who live in this city who are working in journalism for years never hear about this site," he said, adding: "I bet this site is much more profitable than your big news outlet."

According to the Social Puncher report, the site generated at least $100,000 of income per month in the last six months, which Shevtsov called a "conservative estimate."

"Such a profit is impossible in a competitive market, where there is a struggle for each user, and local media are in crisis and are gradually dying out," said Shevtsov.

The report concludes that the website was "launched in a total informational vacuum."

"It is still a mystery how users learned about this site. There are no press releases about its launch, not a single announcement in Canadian media, not even a single review," it reads.

Why should the average Edmontonian care about a website that nobody in the city reads or knows about?

"My biggest concerns when I see something like this is it's another blow to the reputation of journalists and journalism, because people will only see what they want to see," said Fitzpatrick.

While the site may not be as harmful as traditional "fake news" stories that peddle outright lies, he said it still can cause confusion for news consumers.

"There are plenty of well-written fake news sites out there that do a far better job of looking legitimate than the…[City of Edmonton News] site," he said.

Fitzpatrick said it's another reason why news consumers should improve their media literacy, to be able to differentiate between stories that are real and well-researched and those that might be considered "clickbait."

CTV News Edmonton attempted to contact anyone connected to the City of Edmonton News website but was unsuccessful.

The website's contact form appeared to be broken, with users getting an error message when trying to use it.

Emails to contact@cityofedmontonnews.com, the email address listed on the website, bounced back.

CTV News also asked the city if it was concerned that the site was using the City of Edmonton in its name and whether it could cause confusion.

"We remind the public that the City of Edmonton website and block both contain the City's official visual branding, including corporate logo," the city said in a statement. "For certainty about whether something is coming from the city, look for the City logo."

The only way to prevent advertising fraud is to independently verify site traffic, the report says.

Shevtsov said Social Puncher is still investigating City of Edmonton News and other "simulated media" sites and expects to release more details in an upcoming report.