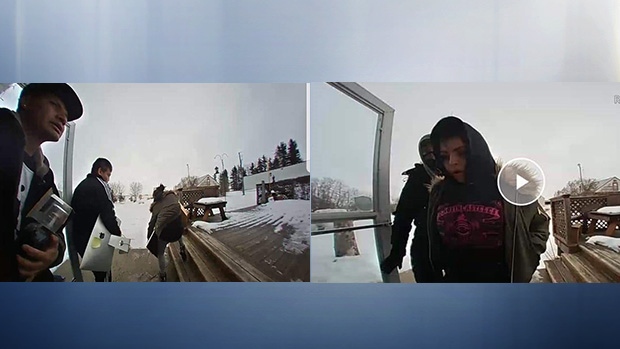 RCMP are looking for four people who broke into and stole from a Thorsby home on Jan. 27.

Police are looking for four people who were caught on camera breaking into and stealing from a Thorsby, Alta., home.

The group broke into a home on Highway 622 on Jan. 27 around 10 a.m. They stole an Apple Mac desktop computer, a camera and a 12-inch travel TV, among other things.

The homeowners were not at the residence at the time of the break in, but were able to watch the thieves via a home security camera and notify RCMP. The thieves fled when the homeowners yelled at them through a two-way intercom system.

All four are believed to be First Nations. They left in an early 2000s gold-beige Cadillac CTS Sedan with an unknown licence plate.

One woman had dark hair that was pulled into a ponytail. She was wearing a beige fur-trimmed coat, black hoodie with a pink emblem, grey leggings and hiking boots.

All three were estimated to be in their mid-20s.

The second woman was described as having a slim build. She was wearing a black jacket, grey hoodie and white baseball hat.