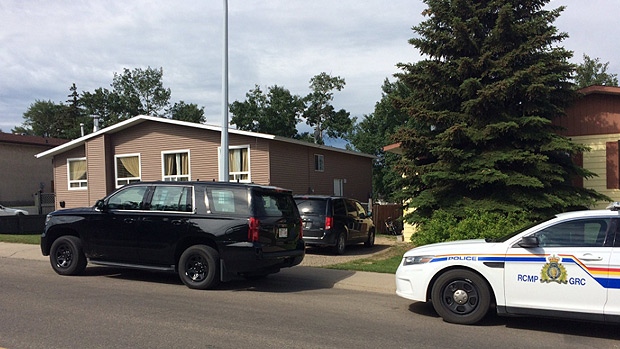 Police respond to what they called a “disturbance” in the Westview Drive area of Sylvan Lake on Monday, June 20, 2016. (Credit: Frazer Snowdon)

RCMP have charged three Sylvan Lake men in connection to an alleged gun incident in the community on Monday.

According to police, neighbours heard what sounded like a gunshot come from “somewhere in or around [a] home” in the Westview Drive area of Sylvan Lake earlier in the day.

RCMP said the “disturbance” ended without injuries and the area was reopened to the public on Monday evening.

Police have since charged Bradley Douglas Stephensen, 30, with a variety of offences including possession of property obtained by a crime over $5,000 and posession of an instrument for use in forging a credit card.

Timothy John Knowles, 33, faces similar charges in addition to four counts of disobeying a court order, identity fraud and nine other charges from Red Deer RCMP for an outstanding warrant.

RCMP also charged Leith Alexandra Curtis, 33, with possession of property obtained by a crime over $5,000, posession of an instrument for use in forging a credit card, as well as four counts of failing to comply with a probation order.

All three men are being held in custody and are scheduled to appear in Red Deer provincial court on June 23.

No other details have been released.

Sylvan Lake is located about 25 kilometres west of Red Deer.