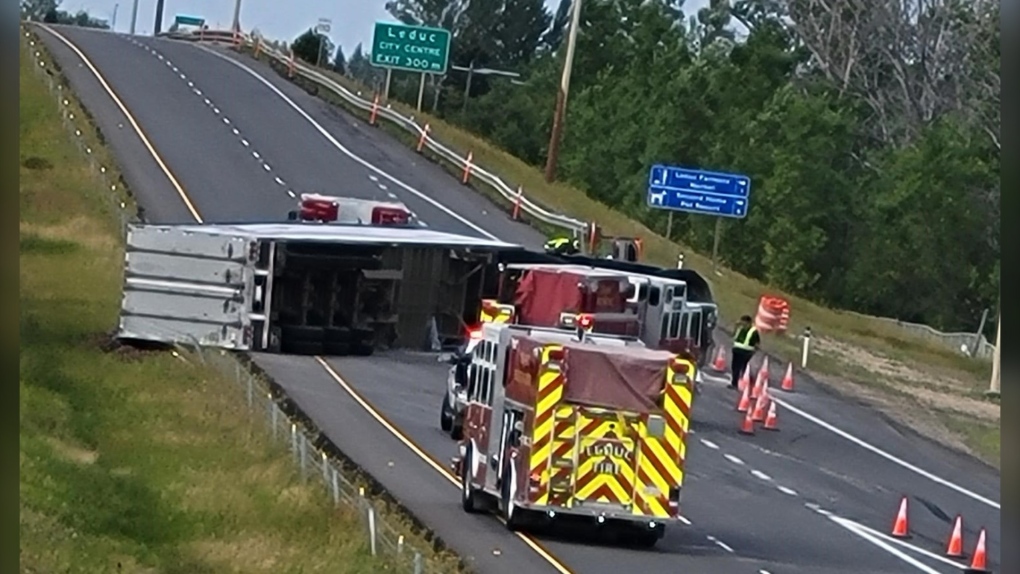 A collision RCMP describe as "serious" is under investigation Thursday, August 12, 2021 (Supplied)
EDMONTON -

RCMP are investigating what caused a semi to roll on Highway 2 Thursday afternoon, blocking the northbound corridor of traffic and spilling diesel fuel.

The semi and trailer unit tipped around 3:45 p.m. about 100 metres north of Highway 2A.

Its driver was not hurt and no other vehicles were involved.

"It has yet to be determined what caused it to turn onto its side," Mounties said in an update later that evening.

In the crash, diesel fuel was spilled. By nighttime, it had been cleaned up and crews were still on scene working to transfer the truck's non-hazardous load.

That work and to tow the semi and trailer from the roadway was expected to take until after midnight.

“Traffic is expected to be diverted for several hours,” RCMP said in a statement. “Alternate travel routes are recommended.”

According to 511 Alberta, the province’s road authority, northbound and southbound lanes near Highway 2A were closed and traffic congested.

Northbound Highway 2 traffic was rerouted at Township Road 490 and also at Highway 2A.