Tornado watch issued for areas north and east of Edmonton 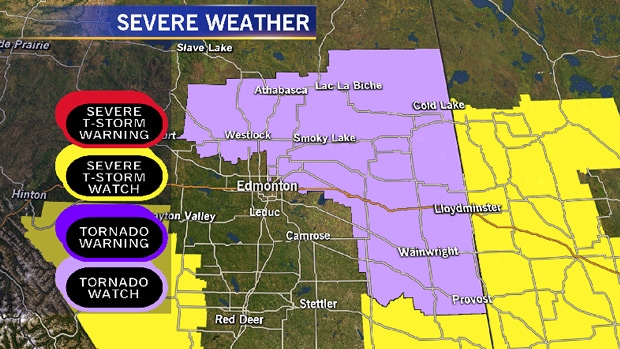 A tornado watch was issued at 12:25 pm for areas north and east of Edmonton. The watch covers the following areas:

All of the areas had previously been under a severe thunderstorm watch but have since been upgraded to a tornado watch by Environment Canada.

A severe thunderstorm warning is also in effect for Clearwater County near Caroline, James River Bridge and Rocky Mountain House.

The tornado watch covers a large area. According to CTV Metrorologist Josh Classen, the vast majority of that region will NOT see severe weather, let alone a tornado. "In fact, there’s no guarantee a tornado will develop at all," says Classen.

However, conditions are favorable for large supercell thunderstorms to develop late this afternoon & this evening, particularly in east-central Alberta.

Areas that get hit by these storms can expect torrential downpours and possibly large hail.  Conditions are also right for some rotation within these storms & it’s possible we’ll see one or more tornadoes later today.

"We’ll continue to monitor the situation closely & we’ll have a much better idea which areas are at a higher risk once those thunderstorms start to develop,' says Classen.

Environment Canada alerts called "Watches" are to inform the public about weather conditions that are favourable for a storm or severe weather that could produce a tornado. Severe thunderstorms also have the potential to produce very large hail, flooding rain, and powerful winds. As certainty increases about the path and strength of a storm system, a watch may be upgraded to a "Warning", which is an urgent message that severe weather is either occurring or will occur.

Environment Canada asks anyone who spots a funnel cloud or tornado to call 1-800-239-0484 to report the sighting, only when it is safe to do so.