Towing industry concerned for safety, business if told to help under legislation

Towing industry concerned for safety, business if told to help under legislation 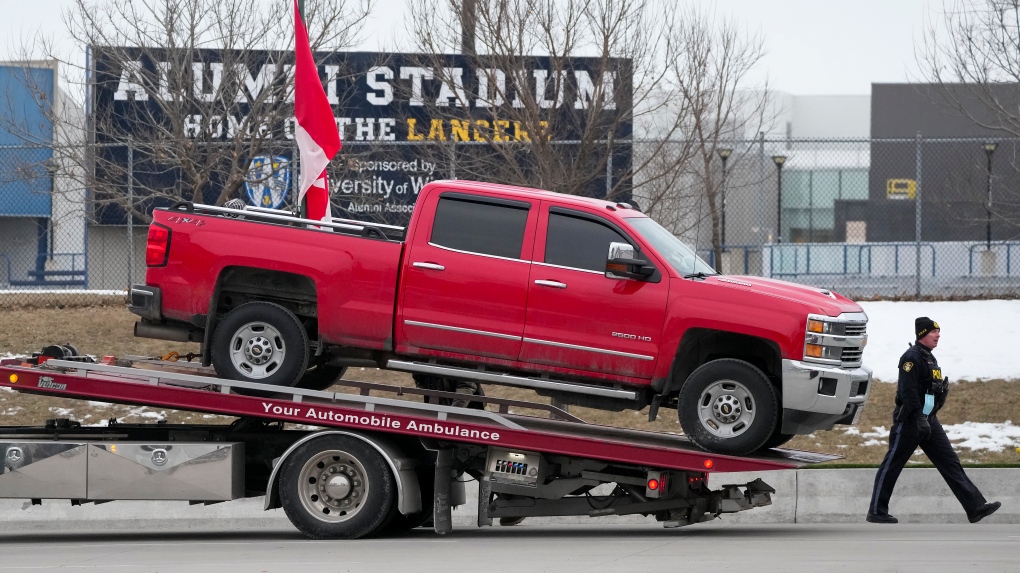 Police tow a truck as they remove all truckers and supporters after a court injunction gave police the power to enforce the law after protesters blocked the access leading from the Ambassador Bridge, linking Detroit and Windsor, as truckers and their supporters continue to protest against COVID-19 vaccine mandates and restrictions, in Windsor, Ont., Sunday, Feb. 13, 2022. THE CANADIAN PRESS/Nathan Denette

Associations representing the towing industry in Ontario and Alberta say expecting operators to clear blockades under the Emergencies Act is easier said than done.

Mark Graves, president of the Provincial Towing Association of Ontario, says demanding private companies remove trucks is a massive undertaking and the government needs to first show it will protect the industry from threats to safety and business.

“This is all about the protection of our employees,” Graves said during a phone interview.

“We have our members and companies asking us what their rights are. And we're telling everybody once we have written documentation, then we'll look at that and get back to everybody. But right now we don't know anything.”

On Monday, Prime Minister Justin Trudeau invoked the Emergencies Act for the first time since it came into force in 1988.

One of the extraordinary powers that law enforcement now has is the ability to demand towing companies either help police remove vehicles from blockades when asked, or police could seize their tow trucks to remove the vehicles themselves.

Public Safety Minister Marco Mendicino told a news conference Tuesday that the blockades are “driven by an ideology to overthrow the government” and there are elements within them that pose a serious threat to safety.

He pointed to Monday's police seizure of multiple weapons from the blockade at the United States border crossing at Coutts, Alta., where traffic was paralyzed for more than two weeks. RCMP arrested 13 people and, on Tuesday, all trucks and other vehicles left the blockade.

Mendicino said the weapons seizure should be a wake-up call to Canadians about “what it is that we are precisely dealing with here.”

On Wednesday, officers walked along Wellington Street in Ottawa handed out notices to protesters encamped there, telling them they “must leave the area now.”

Graves said it's unclear when the government will use its power to call towing companies to help expedite the removal of the Ottawa blockade.

Don Getschel, president of the Towing and Recovery Association of Alberta, said some companies have received death threats since the protests began and companies are concerned about the future of their businesses.

“I can confirm that three of our members had received threatening phone calls and emails,” Getschel said.

At least one company in Alberta received threats because it was seen near Coutts, he added.

“People were threatening to burn their equipment down or burn their facility, so there (were) threats of arson.”

He said it'sgenerally up to individual towing operators and companies to decide whether to help police dismantle blockades, because the “industry has tried to remain neutral through all of this” and has “stakes on both sides.”

“It's hard for me to watch. We're part of the trucking industry as well as we work directly daily with law enforcement.”

This report by The Canadian Press was first published Feb. 16, 2022.