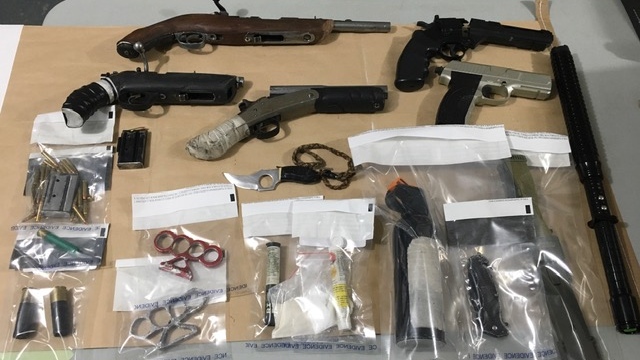 This RCMP photo shows weapons confiscated by police after a Dec. 3, 2019 traffic stop on Highway 88. (RCMP)

EDMONTON -- Two men and two women from northern Alberta are scheduled to appear in a Red Earth Creek court tomorrow to answer dozens of charges that followed a traffic stop on Highway 88.

The four were arrested after their vehicle was pulled over for a speed infraction around 9:30 p.m. on Dec. 3, according to RCMP.

Among the items Mounties say they seized include bear spray, firearms, brass knuckles as well as suspected cocaine and methamphetamine.

James Beaver, Raymond Foss, Caitlynn Noskey and Tricia Beaver were jointly charged with a total of 26 charges, most of which are firearms related counts.

Beaver, 22, of Slave Lake is also charged with a dozen counts of failing to comply with conditions of release as well as one count each of possessing stolen property and obstructing a peace officer.

Foss, 30, of Loon River First Nation is facing 21 counts of failing to comply with his release conditions as well as one count of breach of recognizance.

Beaver, 44, of Slave Lake is charged with possessing a controlled substance.

And, Noskey, 25, of Loon River First Nation is charged with a dozen counts of failing to comply with her release conditions.

All four were remanded into custody and are slated to appear in provincial court tomorrow.