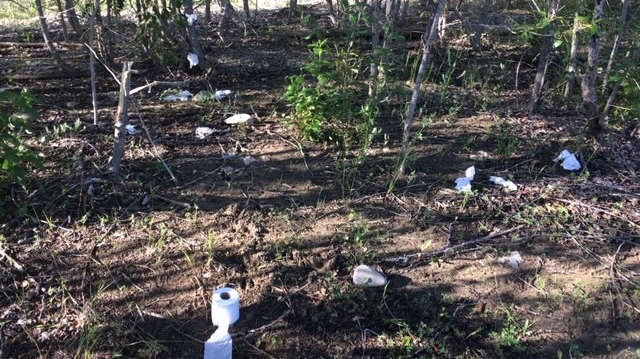 RCMP say an estimated 500 people were at a party in Red Deer County on July 25, and left the site littered with trash, botttles and cans, and human feces. (Photo provided.)

Central Alberta RCMP say garbage, human waste and a dead animal were all found at the site of a party over the weekend which prompted nearly a dozen visits from police.

Mounties estimate there were 500 people at a property in the Garrington Bridge area in Red Deer County on July 25.

RCMP said a “fair amount” of tickets were handed out the following morning.

Over a 12-hour period starting 7 p.m. Saturday, RCMP responded to 11 calls about damaged property, driving, liquor offences, theft, threats and, in one instance, a report of a dangerous weapon.

“Residents in the area expressed frustration to RCMP as they were kept awake by the noise of people partying and setting off fireworks all night long.  One resident reports that the following day there were still 40 vehicles in the area,” a statement from the local detachment reads.

One RCMP vehicle had its window smashed while responding to the complaints.

Alberta Fish and Wildlife also were called in, after a dead deer was found nearby.

“This is concerning behavior which has become very unfortunate for people who reside in this area, their ability to enjoy their homes and their property has obviously been impacted,” commented Sgt. Lori Eiler.

In noting RCMP found there was criminal behaviour and “health concerns” at the event, Eiler added RCMP are “dedicated to prevention and public education primarily, however we will not hesitate to lay charges if the situation warrants it.”