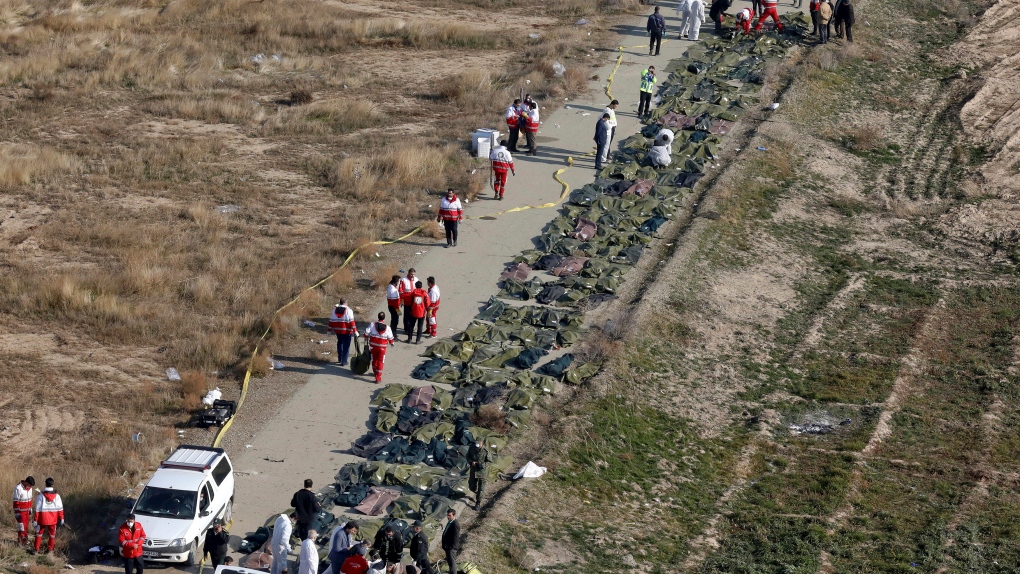 FILE - In this Wednesday, Jan. 8, 2020 file photo, bodies of victims of a Ukrainian plane crash are collected by rescue team at the scene of the crash in Shahedshahr, southwest of the capital Tehran, Iran. Two U.S. officials said Thursday that it was “highly likely” that an Iranian anti-aircraft missile downed a Ukrainian jetliner late Tuesday, killing all 176 people on board. President Donald Trump is suggesting he believes Iran was responsible. (AP Photo/Ebrahim Noroozi, File)

EDMONTON -- A tribute is being held Saturday in Edmonton to remember the Canadians who were killed when a Ukrainian passenger plane crashed minutes after takeoff near Tehran.

Reza Akbari, president of the Iranian Heritage Society of Edmonton, said the event will be held at 1 p.m. at City Hall.

“We cannot forget these people,” he said Tuesday in an interview.

Among the 176 people killed when the airliner was shot down last month were 57 Canadian citizens. A total of 138 people on the flight were connecting to Canada via Kyiv.

Many were students and academics returning to Canada after a December break.

Thirteen people from Edmonton - nine citizens and four international students - were on the plane. They included a medical doctor and her two daughters, two professors and their children, and a number of students from the University of Alberta.

Iran has said the plane was mistaken for a hostile target amid escalating tensions with the United States.

Canada and its allies have been pushing Iran to release the black boxes from the crash so the data can be properly analysed by facilities in France.

Akbari said the families are counting on the federal government to keep up the pressure.

“We understand ... that this is not going to be an easy path,” he said. “We cannot forget and put aside the fact that 57 Canadian citizens were killed ... in a most brutal way.”

He and many others, he said, wonder why the Iranian government won't co-operate.

“What is in that black box that they don't want to release the information?” he asked.

Akbari said it has made many of the families wonder if the crash was intentional.

“The behaviour that we are seeing from the government of Iran makes this Saturday much more important,” he said. “They are not co-operating and it makes (the crash) much more devastating.”

This report by The Canadian Press was first published on Feb. 18, 2020