A group that provides art for a local hospital will be flipping a page this weekend when it unveils its latest exhibit.

In a collection of painted portraits, artist Lauren Crazybull says her “The Future All At Once” series aims to create a larger idea of Indigenous representation.

“I’ve always been drawn to portraits... and I really like the idea of trying to represent someone in their truest form.”

Sitting among her most recent work that’s still scattered around the McMullen Gallery, the 24-year-old Dene/Blackfoot woman has taken a break from setting up her show to talk to CTV News. 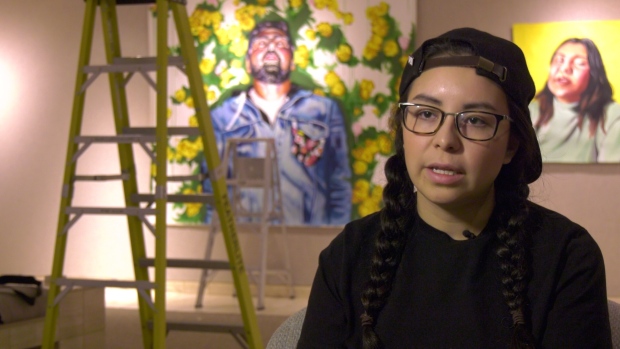 Lauren Crazybull, sits with CTV News Thursday, June 6, at the McMullen Gallery, in Edmonton. Tap the image to watch an extended interview with Crazybull.

‘I didn’t know what my identity meant’

“I grew up in a white family. I didn’t grow up around any Indigenous people,” she said.

Born in Calgary, Crazybull was taken into foster care at the age of 3. Her foster family raised her in the Village of Caroline, west of Red Deer, where she was one of only a handful of Indigenous people in her community.

“It was tough because I didn’t have any Indigenous folks around, so I didn’t know what my identity meant... Once I became an adult and was actually able to learn more about my community and meet more Indigenous people, I wanted to kind of showcase that and show a truer idea of what Indigeneity is.”

At 24, she says she’s been painting since she was 15 years old, but only started getting serious about her artwork three years ago.

After working on the acrylic paintings for roughly nine months, Saturday will mark the opening of Crazybull’s biggest series to date.

“I guess (I feel) a bit nervous, but I feel excited because I’ve worked really hard on these paintings and I’m excited for people to see them.”

Crazybull says, historically, portraits of Indigenous people were often inaccurate, an unfair representation of what they were doing and who they were.

“This series in particular is kind of supposed to challenge a lot of the kinds of things in portraiture, specifically with Indigenous people.” 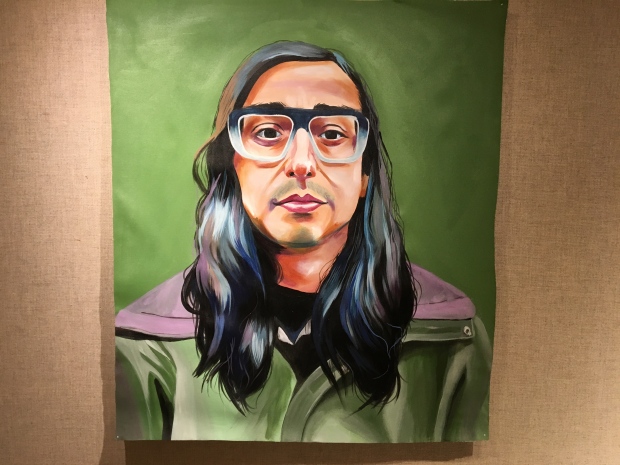 A portrait from “The Future All at Once” series, hangs in the McMullen Gallery, in Edmonton.


Gallery within a hospital

Perhaps an unusual location for an art exhibit, the McMullen Gallery has hosted work like Crazybull’s in Edmonton’s U of A Hospital since 1986.

“We curate shows that we think will have an impact on patients’ experience and maybe also probe some questions about health or wellness,” Friends of University Hospitals Executive Director Tyler Sherard told CTV News Thursday. 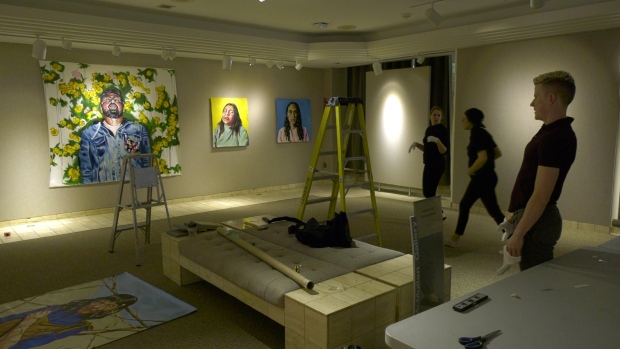 Tyler Sherard of Friends of University Hospitals works to set up “The Future All at Once” exhibit, Thursday, June 6, in the McMullen Gallery, in Edmonton.

Crazybull topped nearly 100 applicants to be named Alberta’s first Provincial Artist in Residence, in January of 2019, a government grant that’s worth up to $75,000.

“It’s really encouraging because it was only a little over a year ago that I decided to just go off on my own and try to make my visual art work,” Crazybull said of the designation.

Crazybull says she drew from various influences in creating “The Future All At Once” series, but acknowledges that her desire to explore her Indigenous heritage with her art likely has to do with her unorthodox upbringing.

“For me, I don’t have a huge connection because I grew up in foster care, so I didn’t have that all growing up... It’s just like learning like anything else.”

Crazybull will be using the provincial residency to work on her next project she’s calling “A Portrait of Alberta.”

Crazybull’s plan is actually to build a map, moving away from portraits for the project. She’ll be travelling the province while making several stops to document locations significant to Indigenous people.

“What I wanted to do with this map is to just show that there’s history and significance everywhere.” 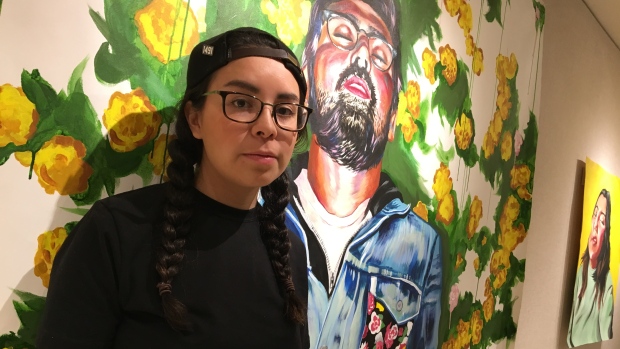 How to see ‘The Future All at Once’

The series of Indigenous portraits will be available for anyone to see in the McMullen Gallery, at U of A Hospital, free of charge from June 8 to Aug. 4.