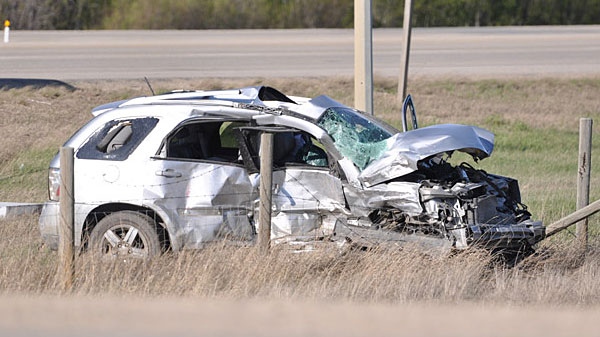 A 68-year-old Grande Prairie man is dead after a three-vehicle collision Saturday afternoon near Bezanson, Alta. Photo by: William Vavrek. May 20.

Two people have died in separate fatal collisions near Grande Prairie this weekend.

RCMP say a pickup truck pulling a trailer was travelling east on Highway 43 when the victim in an SUV tried to turn east on the same highway.

That's when the two vehicles collided.

A third vehicle traveling behind the truck crashed into the two vehicles after the initial collision.

The cause of the collision is still under investigation.

Bezanson is a hamlet located about 35 kilometres east of Grande Prairie.

A 40-year-old Grande Prairie woman died Sunday after a two-vehicle collision south of the Wapiti Bridge.

The woman was traveling south on Highway 40 when she reportedly crossed the centre line into the path of a northbound semi-truck and trailer. The driver of the truck was not injured.

Police are reminding the public to drive safely this May long weekend.