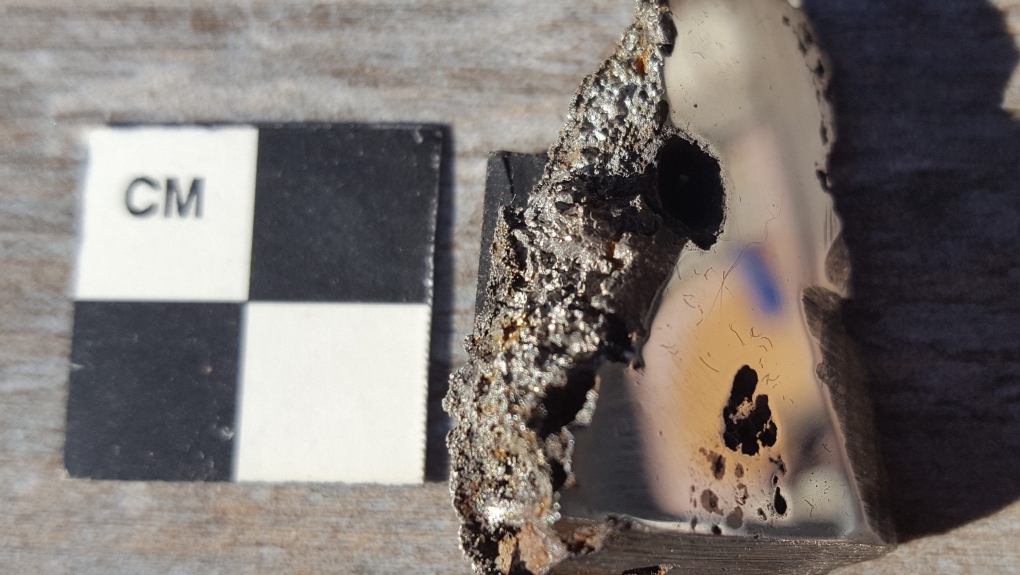 A slice of the El Ali meteorite, now housed in the U of A's Meteorite Collection, contains two minerals never before seen on Earth. (Supplied)

Researchers from the University of Alberta are part of a team that has discovered at least two minerals never before seen on earth.

The newly named elaliite and elkinstantonite were found in a small sample of the 15-tonne El Ali meteorite from Somalia, which was sent to the U of A for classification.

“Whenever you find a new mineral, it means that the actual geological conditions, the chemistry of the rock, was different than what’s been found before,” said Chris Herd, a professor in the U of A's department of Earth and atmospheric sciences and curator of the university's meteorite collection, in a press release.

“That’s what makes this exciting. In this particular meteorite you have two officially described minerals that are new to science.”

Herd worked in collaboration with researchers from the University of California and the California Institute of Technology to classify the El Ali meteorite as an "Iron, IAB complex" meteorite.

During the classification process, he noticed the new minerals.

To confirm the discovery, he brought in another U of A researcher, Andrew Locock, head of the university's electron microprobe laboratory.

Because the minerals have been synthetically created before, Locock was able to identify them quickly.

“The very first day he did some analyses, he said, ‘You’ve got at least two new minerals in there,’” says Herd. “That was phenomenal. Most of the time it takes a lot more work than that to say there’s a new mineral.”

Elaliite was named after the meteorite and the region where it was found, near the town of El Ali in the Hiiraan region.

“Lindy has done a lot of work on how the cores of planets form, how these iron nickel cores form, and the closest analogue we have are iron meteorites," Herd said. "So it made sense to name a mineral after her and recognize her contributions to science."

A third, potentially new, mineral from the sample is being considered and Herd said more might be found if additional samples were sent from El Ali.

For now, researchers are studying the new minerals to see what they can learn about the conditions surrounding the meteorite when it formed.

“That’s my expertise — how you tease out the geologic processes and the geologic history of the asteroid this rock was once part of,” says Herd. “I never thought I’d be involved in describing brand new minerals just by virtue of working on a meteorite.”

Herd presented his findings at the Space Exploration Symposium on Nov. 21.