U of A researchers find genetic marker for sporadic breast cancer 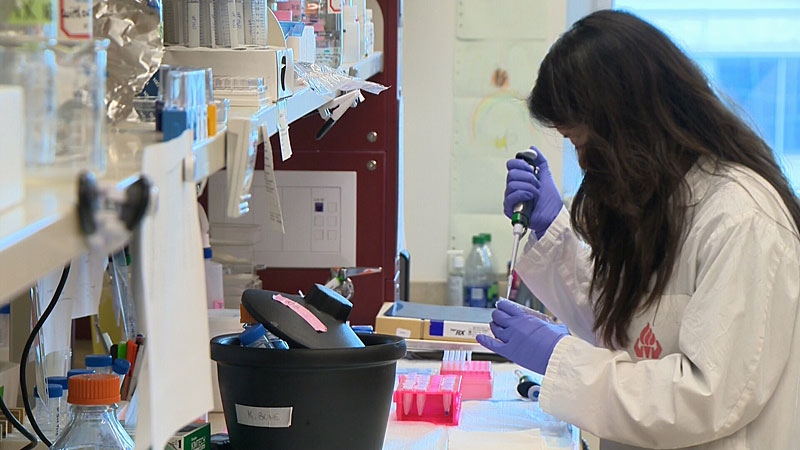 Researchers at the University of Alberta say they’ve made an important finding related to breast cancer in women who have no family history of the disease.

Researchers at the University of Alberta say they’ve made an important finding related to breast cancer in women who have no family history of the disease.

“A large proportion of the women with sporadic breast cancer carried this particular signature,” said Dr. Sambasivarao Damaraju with the University of Alberta’s Faculty of Medicine & Dentistry.

Damaraju and his team say a number of genetic markers have been identified for familial breast cancers but not for sporadic breast cancer, which accounts for 80 per cent of all breast cancer cases.

The team scanned the DNA of about 7,200 Alberta women, including those who have had sporadic breast cancer and those who haven’t.

Findings showed women who had sporadic breast cancer had a genetic marker on chromosome 4 – a marker that has never been associated with familial breast cancer cases.

Damaraju says the finding is a first step to determining more genetic predispositions to breast cancer in women, which can then potentially lead to preventative steps to ensure women don’t get the disease.

“If we could build models for risk… once we take all of these factors into account and lay out these genetic risk factors, once this risk could be identified, then the concept of prophylactic intervention measures will come into play,” he said.

“If you have a biomarker identified that you are at risk for breast cancer, you can be monitored much, much closer and with breast cancer in particular, the sooner it’s detected and treated, the better the outcome," Boston said.

"The research that Dr. Damaraju and his team have complete will dramatically shift what happens to Albertans with breast cancer today, in the future and for the long-term to come.”

Researchers say lifestyle and environment accounts for two-thirds of the risk associated with breast cancer while the remaining one-third of risk is attributed to genetics.

And while the findings are encouraging, much more work still needs to be done.

“Even after cataloguing all of these variants, there is still a large amount of work that needs to be done to identify environmental risk factors,” Damaraju said.

The team’s findings were recently published in the peer-reviewed journal PLOS One.

Click here to read the findings posted on PLOS One.