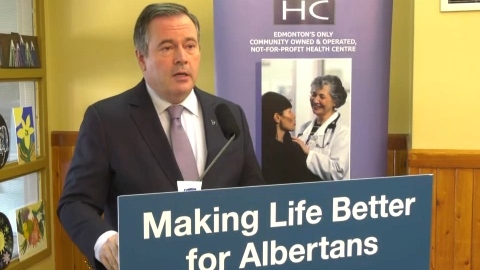 Tim Hoven was planning to challenge MLA Jason Nixon for the nomination in Rimbey-Rocky Mountain House-Sundre. Hoven announced on Facebook Thursday that the party disqualified him.

"This type of creeping cancel culture is what deters most people from getting involved in politics," Hoven wrote.

Jodie Gateman wants to challenge MLA Joseph Schow for the UCP nomination in Cardston-Siksika, but she was disqualified last Saturday.

"I do not have an extensive track record of hateful posts. The post they are using to disqualify me is a repost from over six years ago," Gateman wrote on her website.

Kenney didn't detail what either candidate said Thursday but supported the process that saw them disqualified.

"We will not allow a repeat of the infamous 'lake of fire' incident. We put in place a system to ensure rigorous screening to screen out those who have articulated, supported or been associated with extreme or hateful views," Kenney stated.

The premier said the UCP has "local candidate nomination committees" which investigate, interview and approve or disqualify candidates.

Before the 2019 election, the UCP turned away "approximately 40 people" who wanted to represent the party, Kenney said.

"The United Conservative Party is a mainstream party. We are in touch with the mainstream values of Albertans. We do not and will not tolerate extreme or hateful sentiments."

'NEXT LEADER WILL NEED TO REVIEW EVERY NOMINATION'

​"Would I have worded my comment differently? Yes, in hindsight. Was it the best example to use? No. Do I think it takes me to the level of disqualification? Absolutely not!" Gateman said.

She told CTV News Edmonton that the pro-Trump post was deemed to be "anti-Muslim" and a "joke about exterminating politicians like raccoons," but Gateman strongly disagrees with that assessment.

After the post was shared, Gateman said she was vetted and elected as the UCP's vice president of communications in 2018, so she doesn't understand why this is happening now.

Hoven claimed he was rejected simply for being registered on a social media platform that he didn't name.

"You imply that because this platform can be used by racists and haters, and because I had an inactive account on it, therefore, I must be one of those is ridiculous to even say out loud," Hoven argued.

Brian Jean, who is running for the UCP in the Fort McMurray-Lac La Biche byelection next week, endorsed both Hoven and Gateman.

"The next leader will need to review every nomination held during the leadership review period that had irregularities," Jean wrote on Facebook Thursday.

CTV News Edmonton reached out to the UCP and Hoven for comment on this story.