EDMONTON -- The press secretary for Alberta’s Education Minister appears to have deleted two social media accounts after a photo surfaced of him seemingly vacationing in Hawaii for Christmas.

The Instagram post showed two pictures, including one of Michael Forian on a beach with his arm around a woman, tagged as Eliza Snider, press secretary for the minister of advanced education.

It is unclear when the photo was taken. 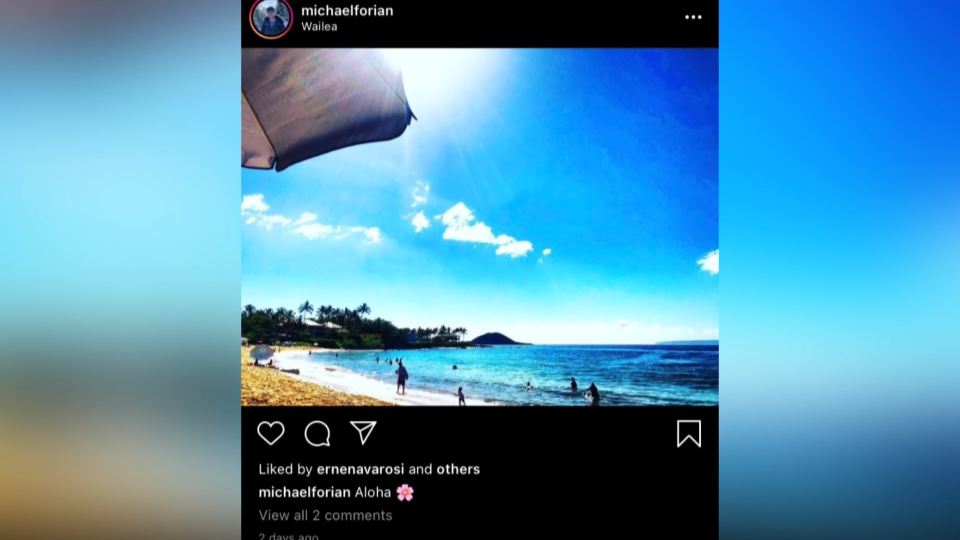 The photo circulated and received widespread criticism on Twitter. By Wednesday, Forian’s public Twitter profile had been removed from the site. His Instagram page, which was previously listed as private, also appeared to have been removed.

It appears Michael Forian, who posted pictures of a Christmas trip to Hawaii on Instagram, has now deleted his Twitter account. Forian is @AdrianaLaGrange's press secretary. #ableg pic.twitter.com/6q79krWMSM

Neither the premier's office nor press secretary for the education ministry responded to CTV News Edmonton's request for comment.

The governments of Canada and Alberta advise against non-essential international travel.

Albertans have been urged for weeks by the province’s Chief Medical Officer of Health to stay home when possible and celebrate Christmas safely to prevent the spread of COVID-19.

So far, there have been no confirmed reports of any elected Alberta officials who vacationed out-of-country. Political experts say it is still a bad look for the UCP.

“These are still people that are insiders. They are part of the party. They're supposed to understand and take seriously the issues that we're all facing and be willing to make the sacrifices that so many Albertans have made,” said Lori Williams, an associate professor of political science at Mount Royal University.

Williams says incidents like this have the potential to create anger and resentment for people who comply with public health restrictions and those who are less inclined to.

“This sort of just proves their point. They could say, ‘If the insiders aren’t taking this seriously then why should we?’” Williams said of people staunchly opposed to government restrictions.

Stories of various provincially elected officials travelling abroad for the holidays have surfaced in recent days.

Ontario’s Minister of Finance admitted to and apologized for travelling to the Caribbean island of St. Barts, despite social media posts suggesting he was in Canada. Ontario’s opposition is calling for Rod Phillips to resign over the matter.

Saskatchewan’s Highways Minister acknowledged Wednesday that he was currently in California to sell a personal property.

The Alberta NDP had a brief response to the photo of Forian: "Honestly, we're focused on the failures of the vaccine rollout," said the opposition's chief of staff, Jeremy Nolais.

"Our Caucus staff are all here in Alberta for what it's worth. The UCP would have to explain why theirs are not."