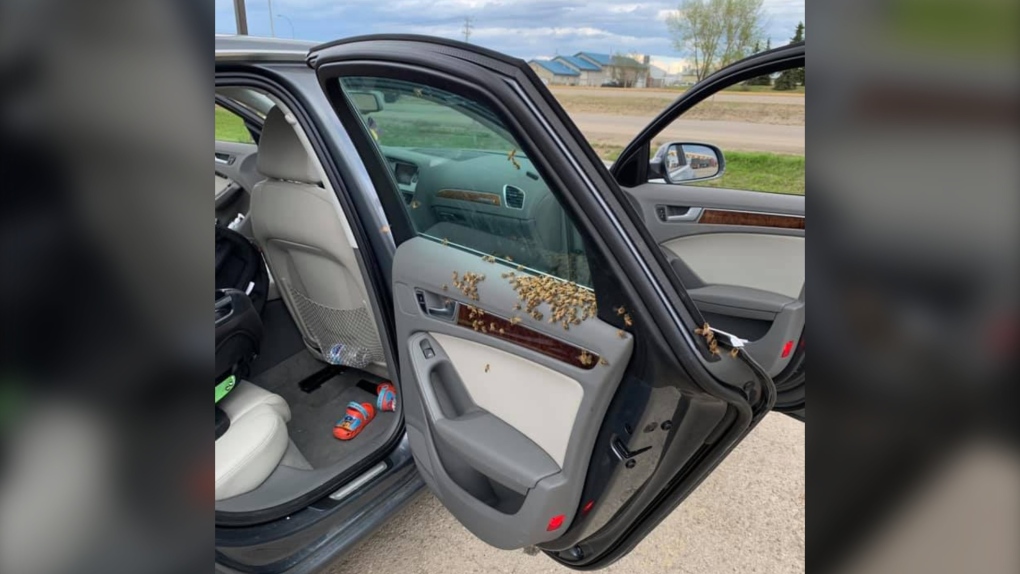 A man returned to his parked car to find a swarm of bees inside. (Courtesy: Todd Loewen)

EDMONTON -- The MLA for Central Peace-Notley had people buzzing on Wednesday.

Todd Loewen removed a swarm of bees from a man's vehicle in Valleyview.

Loewen told CTV News Edmonton that he brushed most of the bees into a bag, removed the rest individually and released them all outside.

He has been beekeeping for four years and said a vehicle is an unusual place for bees to swarm.

"When they swarm, they are looking for a place to set up a hive," he explained. "A car with open doors wouldn’t qualify as a good place, so normally, the bees would move along on their own. Unfortunately, that may have taken hours which would have been very inconvenient for any traveller."

Honey bee swarms are very common in the spring, according to the Alberta Beekeepers Commission.

"Keep your distance because when bees feel threatened, or the swarm is disturbed, they can sting," the commission's website warns.

If a swarm doesn't leave on its own, they recommend calling an experienced professional to remove it.

The Town of Fahler, in Loewen's constituency, is the honey capital of Canada.

Alberta's beekeeping industry is the largest in the country. Commercial producers in the province manage 25-billion bees.

COVID-19 is also having an impact on the industry.

"Normally Alberta beekeepers import 50,000 bee packages (queen and 2-3 lbs of bees)," Loewen said. "Cancellation of flights due to COVID means only a small portion of these packages arrived, so many producers will suffer more losses."

The Alberta Beekeepers Commission has a list of local beekeepers selling bee packages while out-of-province and out-of-country imports are interrupted.