Up-and-down Oilers look to bounce back against Maple Leafs 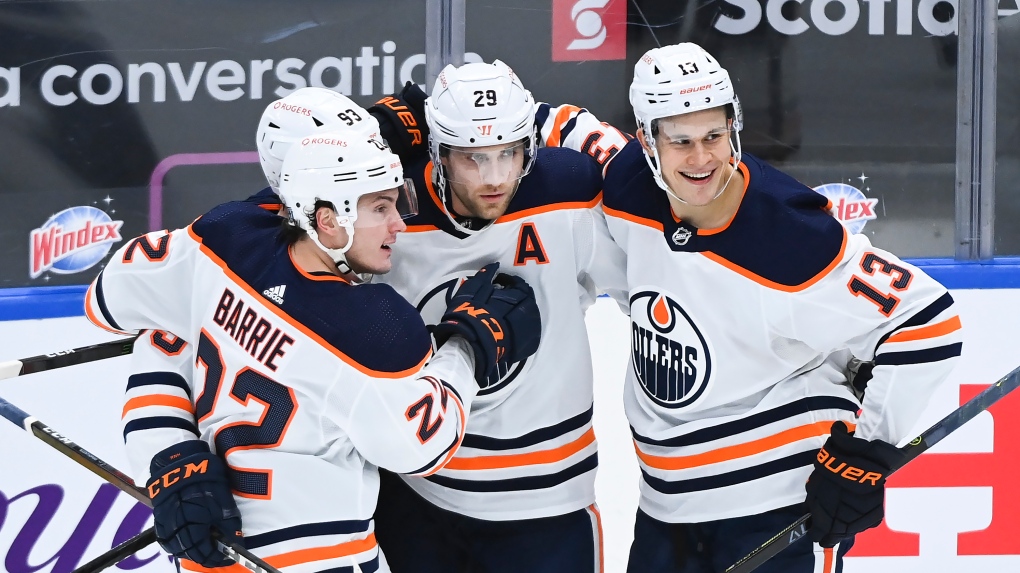 EDMONTON -- The Edmonton Oilers are looking to bounce back on Thursday night after a 6-4 loss to the Jets on Tuesday.

The Oilers host the Toronto Maple Leafs tonight at 8 p.m. after blowing a 3-2 third period lead against Winnipeg in their last game.

Connor McDavid and Leon Draisaitl each had a goal and an assist. Ryan Nugent-Hopkins and Adam Larsson each scored once and Darnell Nurse chipped in three helpers. Mikko Koskinen made 27 saves in his eighth consecutive start.

Those statistics belie the frustrations the Oilers feel because they've yet to put together a two-game sweep of a team in an NHL schedule featuring doubleheaders.

"The desperation after a win in the opening game from the other team is high," said McDavid, whose Oilers beat the Jets 4-3 on Sunday. "We've been in that position; you can't get swept. ... I didn't think our start was an issue. We matched them.

"Obviously in the third period we have to be better. We have to be able to play with a lead, be comfortable protecting a lead. That's something that we've obviously struggled with."

The Oilers need to develop the sense of urgency that the Jets have found so early in the season, according to Nurse.

"We have to find that killer instinct when we get the first game to want to pile on and get the second one," the 25-year-old defenseman said. "That motivation and urgency that you have after you drop the first one, that has to be our mentality each and every night."

Head coach Dave Tippett may make some more lineup changes before facing off against the Jets. Juggling the three extra players on the main roster and six on the taxi squad, he said he likes to keep his options open.

"When somebody doesn't play as well as they can, we have hungry people ready to come into the lineup."

The Oilers might consider placing a heavy cover on Mitchell Marner.

The Leafs are 6-0-0 when Marner registers a point.

The 23-year-old right winger is on a tear in the young NHL season. He scored the game-winner in Calgary on Tuesday to beat the Flames 4-3. With an assist on Auston Matthews' goal in the first period, it was Marner's fifth multi-point game this year.

He and his Oilers opponent McDavid lead the NHL in scoring, each with five goals and 12 points through Tuesday.

"I've really been working on that shot with (Matthews)," Marner said of his one-timer off the Matthews feed. "I think if I can try to find that spot more, I know he can find me there. ... I'm trying to get more of a shot mentality in there, trying to be more of a threat, and it was a great dish by (Matthews) and it was a big goal."

Wayne Simmonds and Travis Boyd added a goal each for the Leafs, who got a 23-save performance from Frederik Andersen. Defenseman Morgan Rielly added two assists to total five in the two-game sweep in Calgary.

"It's good character to battle these games out and get the two points," Andersen said. "We had a chance to take all four (points) today in this little mini-series, and we wanted to do that. It was really nice to see the way we battled until the end and got away with the two points again."