Several vehicles fell into a sinkhole at a car dealership in south Edmonton.

There were four cars in the hole at Infiniti South Edmonton's parking lot when CTV News Edmonton arrived on scene just before 10:45 a.m.

"This is very rare. It's a big one and luckily there's only four in there and not a whole parking lot," Dale Jackson with Cliffs Towing said.

Jackson said two of the vehicles in the sinkhole are new, one is used and one is a customer's car. He added the vehicles didn't sustain "a lot of damage."

It took about an hour and a half to pull all the vehicles out of the sinkhole. 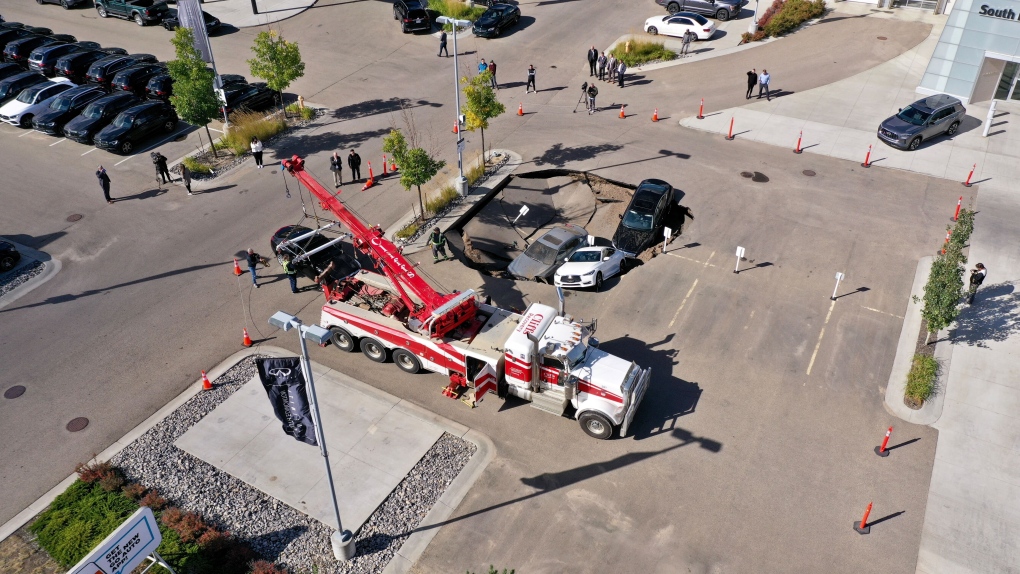 Drone image of a tow truck removing four cars that fell into a sinkhole at a car dealership in south Edmonton on Tuesday, Sept. 20, 2022. (Cam Wiebe/CTV News Edmonton)

Lucky Uppal, an employee at the next-door Mercedes dealership, says their surveillance camera caught the sinkhole, although they declined to share the video.

“Looked at the camera around midnight. You can see them slowly collapsing into the ground,” he told CTV News Edmonton.

EPCOR was on scene, but officials say because the sinkhole happened on private property, it's up to the dealership to deal with it.

Parents can apply with the Canada Revenue Agency starting today to receive the children's dental benefit that the federal Liberals say is intended to provide cost-of-living relief to low-income Canadians but that critics say is a drop in the bucket.

A top European Union official warned Elon Musk on Wednesday that Twitter needs to beef up measures to protect users from hate speech, misinformation and other harmful content to avoid violating new rules that threaten tech giants with big fines or even a ban in the 27-nation bloc.

Eligible Canadians can now apply for the new federal dental benefit, Canada plays its final men's World Cup match, and Christine McVie of Fleetwood Mac dies at 79. Here's what you need to know to start your day.