EDMONTON -- In a hearing that heard explicit language uttered from a fellow councillor's mouth, Ward 11 Coun. Mike Nickel once again avoided sanction from his colleagues at city hall on Thursday.

Despite Pytel's recommendation for council to sanction Nickel, the motion against the mayoral candidate was defeated with a 7-4 vote in favour of sanction.

A two-thirds majority is needed in order to pass a motion to sanction.

If passed, the sanction could have meant a written letter of reprimand addressed to Nickel from Mayor Don Iveson on behalf of council.

On Thursday, Pytel presented evidence to council that suggested Nickel had improperly used email addresses to solicit support for his bid to become Edmonton's next mayor on four separate occasions.

'I DON'T BRING CODE VIOLATIONS TO THIS COUNCIL LIGHTLY'

"If I was given evidence, or anything by councillor Nickel, that would suggest the complaints were brought in bad faith I would investigate and review and make a finding on that," Pytel said while presenting her evidence ahead of the vote on whether to sanction Nickel.

"I have no information to lead me to that conclusion," she added.

Pytel said the issue surrounding Nickel's email activity dates back to October 2020 when the first of four unnamed complainants reached out with their concerns about misuse of their contact information.

"I don't bring code violations to this council lightly or easily," she told council.

The Council Code of Conduct states in part that "councillors may only use the city’s website, social media, and electronic mail only for official duties.

"Website and electronic mail distribution lists that are used for official duties may not be used for campaign activities and communications."

Nickel was not present for the sanction hearing. Instead, his lawyer, Jonathan Denis, was in attendance to represent him during the process.

"None of these complaints, with respect, are valid," he added.

Denis maintained Coun. Nickel's claim that the email addresses in question were collected during his past mayoral campaigns and on his campaign website through petitions.

"Your suggestion is that folks who contacted him in the 90s when he was running previously would've provided those email addresses?" Iveson asked Denis.

According to Pytel, Nickel never corroborated those claims to her satisfaction.

While speaking to media after the vote, Denis clarified that his claim is that the email addresses were taken from Nickel’s previous council runs in 2013 and 2017, not from his last mayoral run in 2001.

'THE BIASES ARE EXTREMELY OBVIOUS'

Ward 7 Coun. Tony Caterina was one of the four councillors to vote against sanctioning Nickel for the misuse of constituent emails.

"The struggle for me is still on the severity," said Caterina. "I don't think that it's been established that the intent was to misrepresent or misuse city assets."

"The biases are extremely obvious," he added, before reading a text from Ward 10 Coun. Michael Walters.

"'I'm so sick and tired of this m**********r. He should be hospitalized,'" quoted Caterina before being abruptly cut off by Iveson.

Later in the hearing, Walters apologized for the text - and did so again later on in a text message to Caterina obtained by CTV News Edmonton. 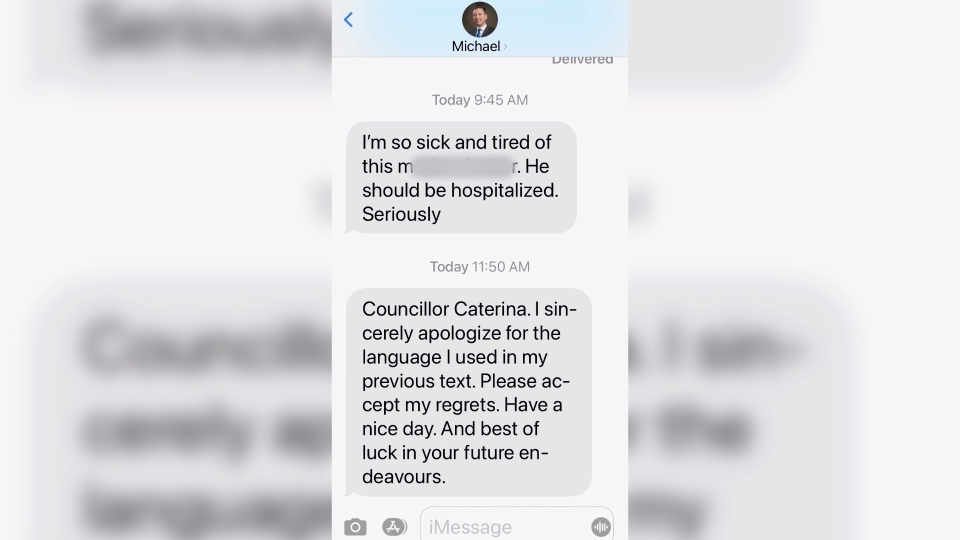 "I'm enormously frustrated that (Nickel) is doing this because he wants it all to be public," said Walters. "He could have easily dealt with the integrity commissioner offline and we would have never had to have the hearing."

An additional sanction hearing for Nickel's actions is still set to go before members of council.

That hearing will deal with social media posts made by Nickel about Ward 1 Coun. Andrew Knack.

"Councillor Nickel falsely attributed the estimated cost of the 2020 Code Complaints to Councillor Knack and his staff member, and called it a '$50,000 + Stunt,'" Pytel's investigation report reads in part.

That hearing had been scheduled for Thursday, but council voted to put it off until July 5.