'We could be in trouble': Alberta Beach residents sandbagging homes facing highest water since '74

“It’s flooding our houses, washing away our access points. Our main beach is covered in water and our main park has eroded about 60 feet,” Jim Benedict, Mayor of Alberta Beach said.

Benedict knows of at least one house that has already been swamped by water from Lac Ste Anne, and he said 107 other lakefront properties in the village are at risk.

Just before 5 p.m. Wednesday an Alberta Emergency Alert was issued and volunteers gathered in the rain to fill hundreds of sandbags.

Benedict expects the lake to crest until the middle of June. 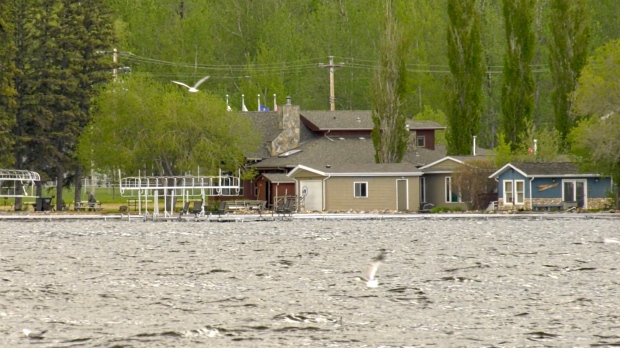 With more rain in the forecast, he’s asking residents to start preparing for a possible evacuation.

“We could be in trouble. If we have to shut down our sewer system because of flooding, we’ll have to evacuate people. It’ll be chaos,” Benedict said.

Alina Beaulieu has lived on the lakefront for 27 years and hasn’t experienced water this high before.

She started pumping water away from her house at 8 a.m. Wednesday, but said it did little good.

“It was coming in faster than you could pump,” Beaulieu said estimating Lac Ste Anne has swallowed two feet of her property in the last couple of weeks.

Some locals, including Beaulieu believe a solution may be down the road a few kilometres in the form of a weir that limits water flow out of the lake and into the Sturgeon River.

She suggests removing the weir and reducing the lake level.

“That could have been dealt with this fall and that water would have been running under the ice and nobody would be flooded out,” Beaulieu said.

Discussion with the province about the weir have happened, but nothing has been done yet, Benedict said.

The Village of Alberta Beach is home to 835 residential properties and about 3000 residents in the summer months.

The Summer Village of Val Quentin, and Sunset Point were also included in the alert.