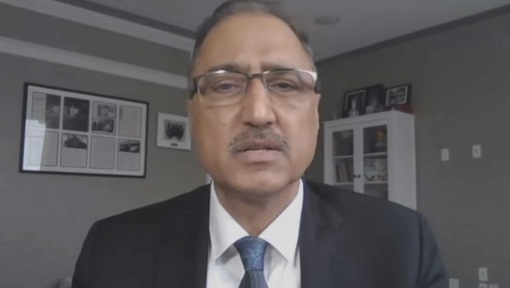 Edmonton's new mayor says he has heard residents' complaints about snow and ice clearing, and Amarjeet Sohi promises the city will "do better" going forward.

"I am equally frustrated as all Edmontonians are," Sohi told reporters on Monday.

"This is about policy. This is about budget. Our staff is working really, really hard. My hats off to all of the people who are out there cleaning our roads and our neighbourhoods."

Sohi pointed out that Edmonton has been hit with snowstorms, extreme cold warnings, freezing rain and fast warmups this winter, which have all made things a mess on city streets.

The city was under a winter storm warning on Monday as freezing rain in the morning made roads and sidewalks icy. Snow and wind were expected to make the roads worse through Tuesday.

"There are things that are not in the city's control, particularly the amount of snow we had this year, and also the freeze thaws cycles and the number of them that we've had with freezing rain," he explained.

"This is no excuse. We gotta do better, and I am absolutely committed to asking these questions as we update our snow and ice policy this year."

Some residents have complained about how the city is plowing in neighbourhoods, creating large windrows which aren't always piled where they're supposed to be.

The city had to pause that program earlier this month, because of an unusually bad cold snap.

An audit released in February 2021 recommended 12 changes to the city's snow clearing policy.

The report said the city had 11,833 kilometres of paved roads to maintain in 2019, and it cost $54 million for plowing, sanding, and de-icing.

But Sohi said that's clearly not enough, and at least one council colleague agreed.

"Our policy and budget is not matching the realities that we are facing now with climate change and how climate change is causing more temperature fluctuations," Sohi said.

Sohi promised a "rigorous debate" at council the next time snow and ice clearing is on the agenda.

Last August, a previous version of council ordered a report on "any equipment, staffing and budget changes" needed to improve snow and ice service. That report is due before council on Apr. 25.

The decision by police to wait before confronting the gunman at Robb Elementary School in Uvalde was a failure with catastrophic consequences, experts say. When it was all over 19 students and two teachers were dead.

Indigenous B.C. filmmaker says he was refused entry on Cannes red carpet for his moccasins

A Dene filmmaker based in Vancouver says he was "disappointed" and "close to tears" when security at the Cannes Film Festival blocked him from walking the red carpet while dressed in a pair of moccasins.

As Russia asserted progress in its goal of seizing the entirety of contested eastern Ukraine, President Vladimir Putin tried Saturday to shake European resolve to punish his country with sanctions and to keep supplying weapons that have supported Ukraine's defence.

The actions — or more notably, the inaction — of a school district police chief and other law enforcement officers have become the centre of the investigation into this week's shocking school shooting in Uvalde, Texas.

Around a hundred people gathered at noon Saturday at the empty Vancouver home where Chelsea Poorman’s remains were found late last month to show their support for her family's call for answers and justice.

Canada and Finland won semifinal games Saturday to set up a third straight gold-medal showdown between the teams at the IIHF world hockey championship.

Riot police fired tear gas and pepper spray at Liverpool supporters forced to endure lengthy waits to get into the Champions League final amid logistical chaos and an attempt by UEFA and French authorities to blame overcrowding at turnstiles on people trying to access the stadium with fake tickets on Saturday.

48K without power one week after deadly storm swept through Ontario, Quebec

One week after a severe wind and thunderstorm swept through Ontario and Quebec, just over 48,000 homes in the two provinces were still without power on Saturday.

Explainer: Where do hydro poles come from?

The devastating storm in southern Ontario and Quebec last weekend damaged thousands of hydro poles across the two provinces. CTVNews.ca gives a rundown of where utility companies get their hydro poles from, as well as the climate challenges in the grid infrastructure.