'We just want to be a vibrant community': Rally calls for lasting security in Edmonton's Chinatown

Community leaders demanded immediate action from all levels of government, the Edmonton Police Service, and social support agencies to ensure Chinatown and downtown as a whole remain safe and accessible to all.

"We want to be recognized that there are some outstanding issues," said Jackson Ho, a community spokesperson.

A 36-year-old has since been charged with second-degree murder in both deaths.

At the rally, incense was burned, as flowers and fruit were placed beside photographs of Hoang and Trang.

"Today is really about I would say creating awareness, not just about the situation that happened last week but overall, Chinatown is a community that requires safety and support of the city and the province," Ho said.

"We just want to be a vibrant community," he added. "We want to make sure that all citizens, all guests that enter into Chinatown have that sense of safety."

People at the rally held signs reading, "we want action," "safety and protection," "protection is safety," "hug your Chinatown shop owner," and "Chinatown here to stay."

"Chinatown is really a part of downtown," Ho added. "(So) this is really an Edmonton effort. People of all cultures come to Chinatown to enjoy." 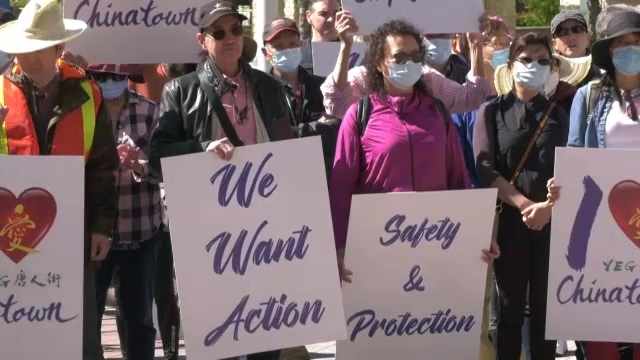 Edmonton Police Service Chief Dale McFee attended the rally and affirmed that the police service was listening and responding to the concerns of the Chinatown community.

"We lost a couple of community members," he told reporters. "We've got a community that is obviously grieving.

"They're in need of help and I think as my role as the leader of our police service and a member of our community in a position of leadership I need to be here," McFee said. "We need to find solutions and we need to find them quick, and that's my commitment to them." 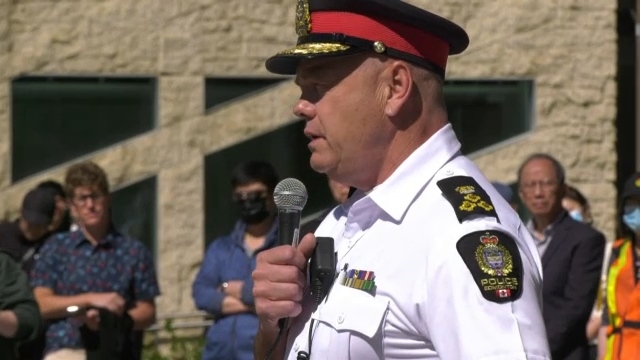 While the police service has already pulled officers from other divisions to increase its downtown presence, McFee said the city needs sustainable solutions for the long-term.

"The two underlying pinning things are that the vulnerable need to be connected to services, and we've been doing a really good job (at that)," he said. "The second part is the crime and the violence."

"There's a lot of money and a lot of services in this city, but when you map it out," he added, "we need to get alignment that has outcomes associated. It's not about moving money from one agency to the other. That's never worked. It's about having a continuum of services to get the people the right service they need at the right time."

This morning I was proud to stand with the Chinese community at City Hall. The EPS hears you and will work closely with the community to address your concerns. #yeg pic.twitter.com/5W9ygUoLBd

"Social services are a big part of this because I mean we are working on the ground floor right now with that doing the best that we can do with the resources that we have," Cooke said.

More consistent funding for agencies providing support to vulnerable populations will help not only those who need it, but entire neighbourhoods, Cooke said.

"Social services are mostly funded through grants," Cooke added. "When those dry up or are pulled from us it makes things a lot harder to get the results we all want to see together."

For Kim Chow, a concerned community member at the rally, whatever actions are taken to help Chinatown, they need to start now.

"There's a lot of people who feel unsafe coming down there," Chow said.

Chow said she's already noticed the increased police presence, but hopes it isn't something that is simply in place for a few weeks after the latest incidents.

"(I want) my kids to feel safe when they go down there in the next few years as well or when they're older and be able to bring their kids down there eventually."

Some emergency rooms across Canada shutting down amid staff shortages

Hospitals overwhelmed by the pandemic’s onslaught are still facing a number of challenges, causing unprecedented wait times in emergency rooms across the country.

It's been said no one's success is complete without failure, but a new international exhibit in Calgary is proving that even some of the most talented innovators had some of the worst ideas for consumers.

Thousands of residents in Sydney suburbs were told to evacuate their homes on Sunday after heavy rains caused floodwaters to rise and rivers to overflow in what authorities called life-threatening emergencies.

Children among 77 kept in Nigeria church for rapture, police say

Police in Nigeria have freed at least 77 people who were kept in a church basement by pastors who preached to them about Christian believers ascending to heaven with the second coming of Jesus Christ, authorities said Sunday.