'We want to find answers': Police release images of persons of interest in Ritchie homicide

Homicide investigators in Edmonton have released surveillance images and video in connection with the homicide of Xavier Chartier in the Ritchie neighbourhood last June.

Police hope the video and photos will help them identify and speak with a total of seven people.

Officers found Chartier in medical distress with stab wounds in the early hours of June 2 in the area of 98 Street and 78 Avenue. The 30-year-old later died in hospital from his injuries.

Police say prior to the apparent altercation, Chartier was seen on surveillance video walking in an alley between 80 Street and 79 Avenue. He was with three other men who police are now seeking to identify.

"If anyone has heard anything about this event ... we want to hear that because the smallest piece of information can progress an investigation,” said Buhler.

"We want to speak to those people.”

Investigators are also seeking to speak to a cyclist and male pedestrian shown on surveillance video turning east onto 80 Avenue from 99 Street. The cyclist shouts at the pedestrian, asking, “What’s the buzzer?”

Police are also hoping to identify another man believed to be associated with the investigation and shown in images to be wearing a red bandana, tank top and jeans.

Finally, police are hoping to speak with an unknown man who was with an injured Chartier when he sought help at a residence on 78 Avenue, east of 99 Street but fled before paramedics arrived.

Police also recovered a Peugeot bicycle with a large front wheel and red back wheel from the crime scene.

Anyone with information is asked to call police.

"If anyone has heard anything about this event ... we want to hear that,” said Buhler.

“The smallest piece of information can progress an investigation." 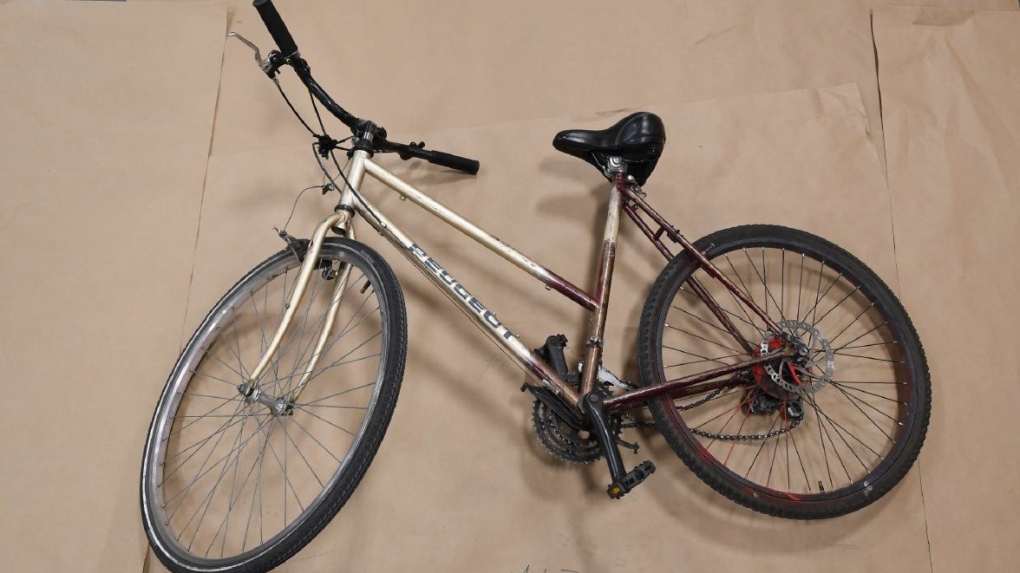 Police say this bicycle was recovered from where Xavier Chartier was killed. (EPS)