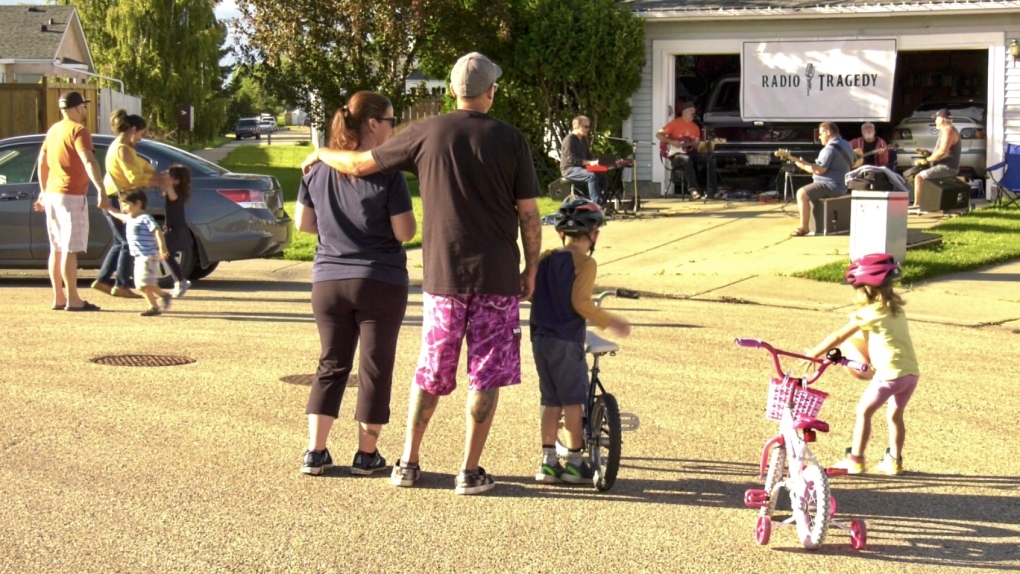 EDMONTON -- When the global COVID-19 pandemic hit Edmonton in mid-March the local band known as Radio Tragedy lost all of it’s gigs and it’s members stopped playing together.

“We were going nuts. We didn’t play together for almost three months, from the middle of March to the early part of June,” Al Stafford, a singer and guitar player with the band said.

When public health restrictions eased and the weather warmed up, Stafford said the five-man band decided to take it’s show outdoors, playing relatively-quiet, mellow versions of classic rock tunes on a driveway in the Callingwood area.

“This is fantastic! What a great community,” Karen Whitham, who was visiting from BC, said while dancing and watching a Thursday performance. “I love this music and especially when I can dance with my grandson.”

The members of Radio Tragedy all have regular jobs, but they enjoyed playing at parties, bars and casinos for fun and a little bit of money, until COVID-19 forced everyone to stay home.

“This year we were hoping we’d get the ball rolling a bit more but everything we had booked has been cancelled,” Stafford said.

On Thursday, about 20 people came and went as Radio Tragedy played cover songs made famous by The Beatles, The Wallflowers and Tom Petty.

Stafford is also known locally for his work as a public address announcer with the Oilers and the local CFL team.

He said his bandmates are comfortable playing to no one, but a small crowd made their jam session a lot more fun and helped them forget about the gigs they’ve lost.

“People come by and they’ll stop and sit for a couple of songs. Some of them might get up and dance and the kids are very expressive, which is great to see. So for us, it’s fabulous, because it’s great visual feedback that people are enjoying what they’re hearing,” Stafford said.

Radio Tragedy is now looking into how it can safely perform more shows outdoors this summer.

The band’s information can be found here: https://m.facebook.com/RadioTragedyRocks/