'When I took the bike I had a big cry': Edmonton father installs ghost bike for son 34 years later

After more than three decades, a grieving father has installed a ghost bike memorial along 101 Street and Kingsway Avenue to honour his son killed while biking home.

Ben Sauvé, 17, was leaving drama rehearsal at Victoria Composite High School on Oct. 5, 1987, when he was struck by a turning Greyhound bus — still within sight of the school.

Since then, Ben’s bike has been tucked away in Clayton Sauvé’s shed until he decided it was time to downsize.

“I thought I either have to throw it away or do a ghost bike event.”

Sauvé told CTV News Edmonton a memorial was the best way to remember his son and called Bike Edmonton to help keep the memory of Ben alive.

“It was difficult for me to prepare,” Sauvé recalled. “When I took the bike I had a big cry.”

He remembered his son as someone that everyone liked and gravitated to.

“He had girlfriends galore,” Sauvé laughed. “All the guys were jealous.” 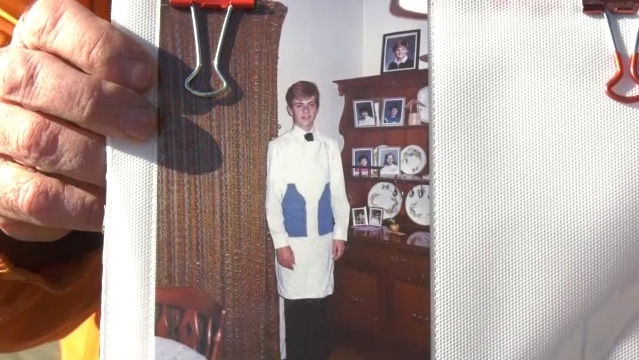 For a number of months following Ben’s death, Sauvé said he wasn't able to bike on the roadways and stuck to paths in the river valley. But he has since returned to the road.

Chris Chan, the executive director for Bike Edmonton, explained that while road safety has come a long way for cyclists over the years, there’s still a long way to go.

“Everyone deserves a safe way and safe options to move around their city,” he added.

Chan told CTV News the memorial will stay up as long as it’s being respected and maintained. If family and friends are placing candles and flowers around it, the city won’t take it down.

Sauvé said if Ben knew this memorial was going up in his honour and encouraging bike safety in Edmonton he would be “pretty happy.”

“’Look, I’m the centre of attention again,’” he laughed as he imitated his son.

“It is a very moving thing for me,” Sauve took a moment to pause. “I feel like he is with us in spirit and that is a very wonderful feeling.

Instead of issuing a singular federal national COVID-19 vaccine passport, the federal government says that each province and territory will be responsible for issuing a 'standardized pan-Canadian' vaccine passport that Canadians can use when travelling abroad. Each province's system is supposed to have a 'common' look and feel, with the expectation that by next month all Canadians will have access.