Where are they now? The '95 Canadian 'Dream Team' 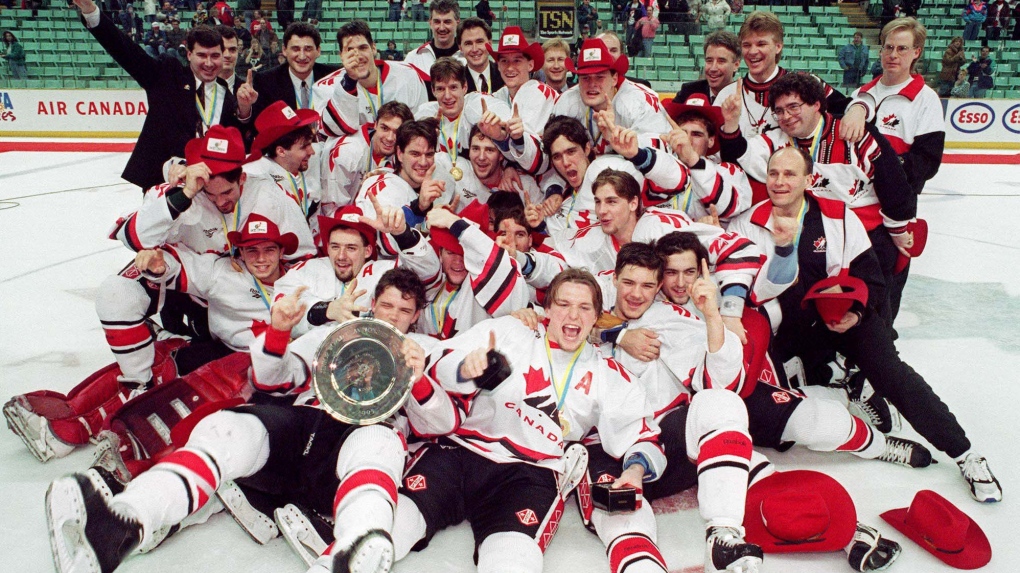 Team Canada poses with their gold medals after beating Sweden in the final game of the 1995 World Juniors in Red Deer. (CP PHOTO/ Ray Giguere)

EDMONTON -- They were called “the Dream Team” and Canada’s 1995 World Juniors squad lived up to that lofty billing.

With the National Hockey League lockout stretching into December of 1994, Team Canada was stacked with seven players under NHL contracts, and led by star prospects Alexandre Daigle, Ryan Smyth and Ed Jovanovski.

The powerhouse Canadians swept aside the competition in the round robin event, failing to score in only one of 21 periods of hockey and earning a perfect seven wins in seven games to capture the gold with a game to spare.

“It was by far, not even close, the most dominant Canadian team that I ever saw at the World Juniors,” said Paul Romanuk who called the tournament for TSN between 1990 and 2001.

“It was never in doubt that they were going to win the gold in that tournament.”

Twenty-five years later, most of the players remain in hockey through coaching or scouting.

But the team included two future show business executives, a pair of budding hockey broadcasters and a couple of future NHL executives, including the only player ever to win three World Juniors gold medals.

Here’s a look at where the members of that team are today, nearly 25 years later.

Hay was coaching his hometown Kamloops Blazers before the tournament and later returned to that position in 2014 after a decade as coach of the Vancouver Giants. In between, he coached Canada again at the 2012 World Juniors in Edmonton and Calgary, winning a bronze medal. He retired from coaching in 2018 and remains as an advisor for the Blazers.

Storr went on to play parts of nine NHL seasons for the Los Angeles Kings. He stayed in Southern California after retirement where he operated a goaltending school. Last fall, he was announced as the new owner and head coach of the Oakville Blades of the Ontario Junior Hockey League.

Cloutier played for four NHL teams over parts of 10 seasons and later worked as a goaltending coach for the Barrie Colts and his former team, the Vancouver Canucks. He left his job with the team last September citing personal reasons. 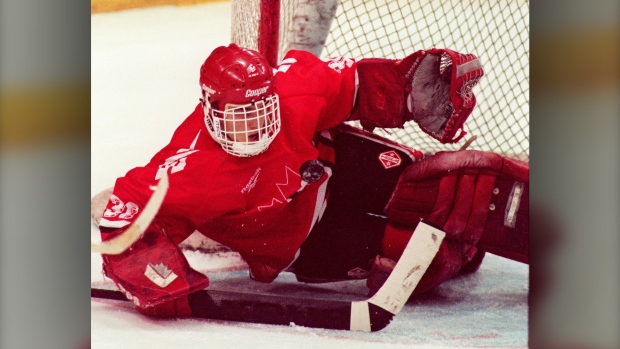 Allan won gold again with Canada at the 1996 World Juniors serving as an assistant captain. He was drafted by the Vancouver Canucks but never made the NHL. He played in the AHL and Europe for 11 seasons and retired in 2007.

Baumgartner also claimed another gold medal with Team Canada at the ‘96 World Juniors. He played for six NHL teams over a 13-year career. He’s now an assistant coach with the Vancouver Canucks.

Jovanovski was drafted first overall by the Florida Panthers in 1994, won Olympic gold with Canada in 2002 and played two decades in the NHL before retiring in 2015. He recently joined Fox Sports Florida as a colour TV analyst for Florida Panthers games.

Canada’s third-highest scorer and one of four Canadians named to the tournament’s all-star team, McCabe went on to play 17 NHL seasons with six teams, retiring in 2011. His career included parts of three seasons with the Florida Panthers where he’s now the team’s director of player personnel.

Redden, the ‘95 team’s lone 17-year-old, returned to win another World Juniors gold in 1996 and went on to a 14-season NHL career, all but three of them with the Ottawa Senators. He now lives in Kelowna, B.C. 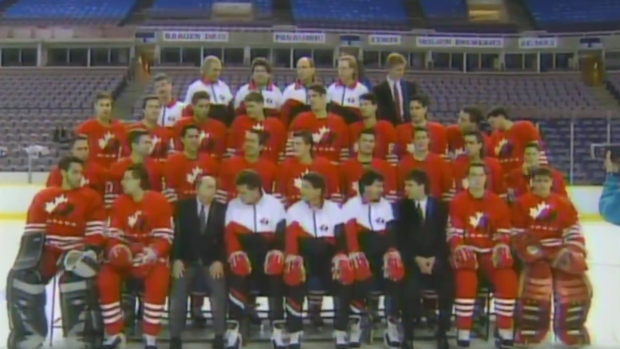 In ‘95, Rivers scored game-winning goals over Ukraine and the Czech Republic. He went on to a 16-year pro career that included stints with seven NHL teams as well as three teams in Europe. He now owns a hockey skills and coaching clinic in Missouri.

Sorochan played three NHL games for the Calgary Flames between 1998 and 2000 and four more pro seasons in Europe and the East Coast Hockey League before retiring in 2004. He didn’t respond to inquiries about his whereabouts but was listed in 2013 as a union representative in the Edmonton area.

Alison was the ‘95 World Junior’s co-leading scorer with 15 points. His career was hampered by concussions and a neck injury, but he still played parts of 11 NHL seasons. After retirement he reportedly operated a horse farm near Toronto. Today, he operates a film and TV production and financing company in Los Angeles.

Botterill returned to win gold again with Canada in 1996, becoming the only player in World Juniors history to win three gold medals. He played parts of seven NHL seasons with four different clubs and has worked as general manager of the Buffalo Sabres since 2017. 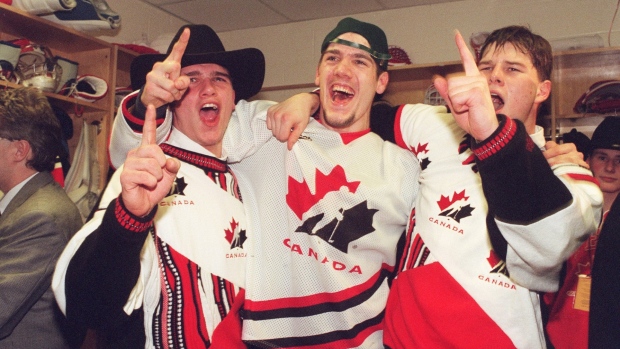 Courville appeared in 33 games for the Vancouver Canucks between the 95/96 and 97/98 seasons before playing another decade in the minors. He coached the Reading Royals to the 2013 East Coast Hockey League title and now coaches minor hockey Pennsylvania.

Daigle was regarded as hockey’s top prospect in 1995, but found NHL stardom elusive and played the last six years of his career in Switzerland. He now operates a movie studio in Montreal.

Daze was Canada’s leading goal scorer in ‘95, including a hat trick in a 8-5 win over Russia. Back problems hampered him near the end of his 11-year NHL career, but he managed to score 38 goals for the Chicago Blackhawks in 2001/02. He lives in the Chicago area and helps out with his son’s minor hockey team.

Donovan played for six teams over a 15-year NHL career. He retired in 2010 as a member of the Ottawa Senators and he remains with the team working as a player development coach.

Friesen built his NHL career with seven seasons for the San Jose Sharks. He appeared for four other NHL teams as well as playing two seasons in Germany before retiring in 2011. He now coaches a minor hockey team in Anaheim, Calif. 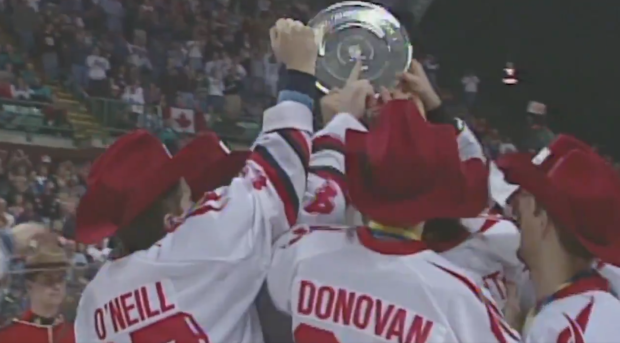 Canada’s ‘95 captain played for four NHL teams over 11 seasons. He retired after being a part of the Edmonton Oiler team that went reached the 2006 Stanley Cup final. After retirement, he worked as an assistant coach for the Guelph Storm of the Ontario Hockey League and is now an amateur scout for the Vancouver Canucks.

Murray was the team’s and tournament’s co-leading scorer and went on to a 15-year pro career that saw NHL stops in Calgary, Philadelphia, Carolina and Los Angeles. He retired in 2010 and is now in his fifth season as the head coach of the Minot Minotauros, a Tier II junior team based in North Dakota.

O’Neill was part of the Hartford Whalers’ final season and played 11 NHL seasons with Whalers, Hurricanes and Maple Leafs. He’s now a hockey analyst and host for TSN radio in Toronto.

Pederson went on to play seven NHL seasons with the Devils, Canucks and Coyotes before a nine-year stint playing in Germany. He later went on to coach the Ridge Meadows Flames Junior B team and became involved in Canucks Alumni events. He’s listed in public documents as an employee for the City of Surrey, B.C. 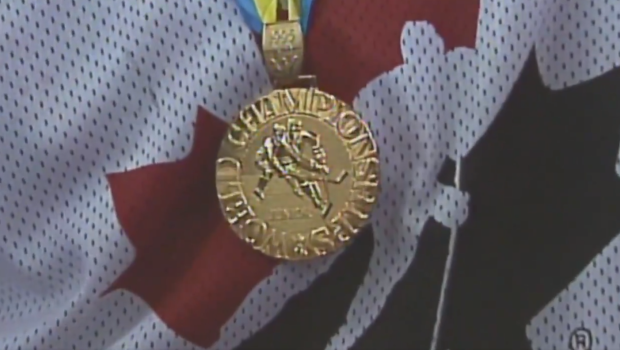 One of five Albertans on Team Canada, Smyth played 19 seasons, including 14 in Edmonton. He retired in 2014 as the Oilers sixth all-time leading scorer. He now partly owns the Hockey Super League, a high-level private league operating in Alberta. In Sept. 2018, local media in Tennessee reported Smyth and his family had moved to the Nashville area.

Tucker played 14 NHL seasons with four teams but is best known for a nine-year run with the Toronto Maple Leafs. He retired from the NHL in 2010 and worked for a few years as a player agent.