Why Maskwacis? Alberta First Nation to be visited by Pope a community of proximity and history, locals say

Why Maskwacis? Alberta First Nation to be visited by Pope a community of proximity and history, locals say

When Pope Francis' tour of Canada was announced in June, that Edmonton would share hosting responsibilities with just two other cities was presented as a strategy to accommodate the pontiff's restricted mobility.

In the Pope's itinerary, Maskwacis – a community south of Alberta's capital city – was introduced to the world as "home to the former Ermineskin Residential School, one of the largest residential school sites in Canada."

On July 25, Francis will participate in a formal program there and is expected to reiterate an apology for the Roman Catholic Church's role in Canada's government-funded and church-run residential schools. It is estimated more than 150,000 First Nations, Métis and Inuit children were students of the system during the 18th and 19th centuries, which largely denied them access to their own communities, cultural practices and adequate care.

Pope Francis is not scheduled to attend any other residential school site while in Canada.

Those who know Maskwacis well believe it was selected for its history, location, Catholic ties, and openness.

The province of Alberta was home to 25 of 139 residential schools in Canada, more than any other jurisdiction.

According to the National Centre for Truth and Reconciliation (NCTR), overcrowding and illness were problems early in the school's operation. The NCTR has so far identified 15 students who died at the school.

When six-year-old Bruce Cutknife began attending the school in 1960, he only spoke Cree. 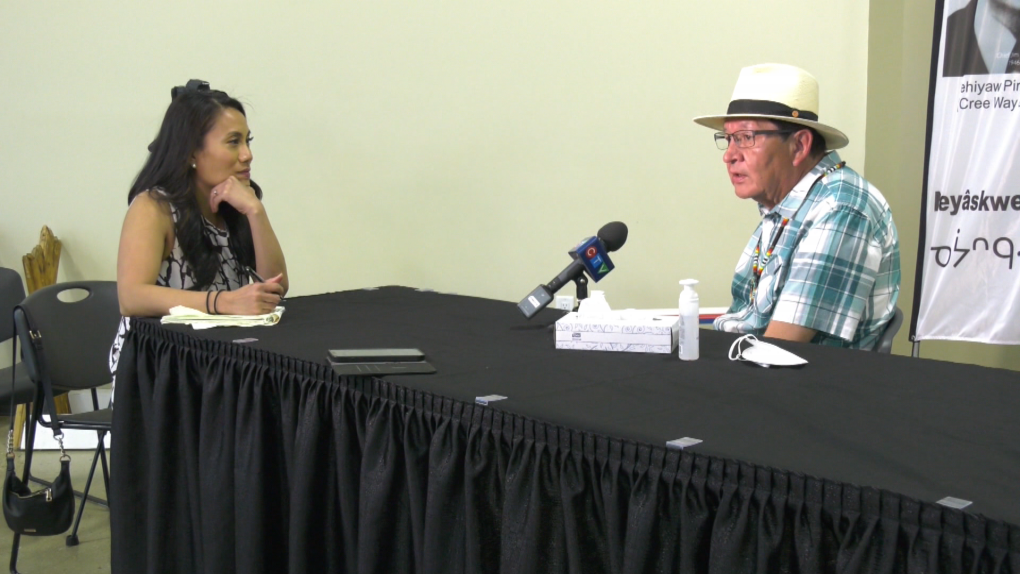 "The fact that we didn't understand the instructors would mean punishment," the soon-to-be-68-year-old told CTV News Edmonton. "If you didn't immediately respond to what they wished, then you were punished. Slapped. Ruler across the hand. Ringing of the ears. Boxing of the ears."

He remembers witnessing other students receiving yardstick beatings and strappings.

"You're in constant fear of misstepping, trying to do the right thing and appease your tormentor. So at that point, I didn't realize what was occurring," he said of the assimilative intent and effect of Canada's residential schools.

Josh Littlechild's father never spoke of his experience at the same residential school until recently. 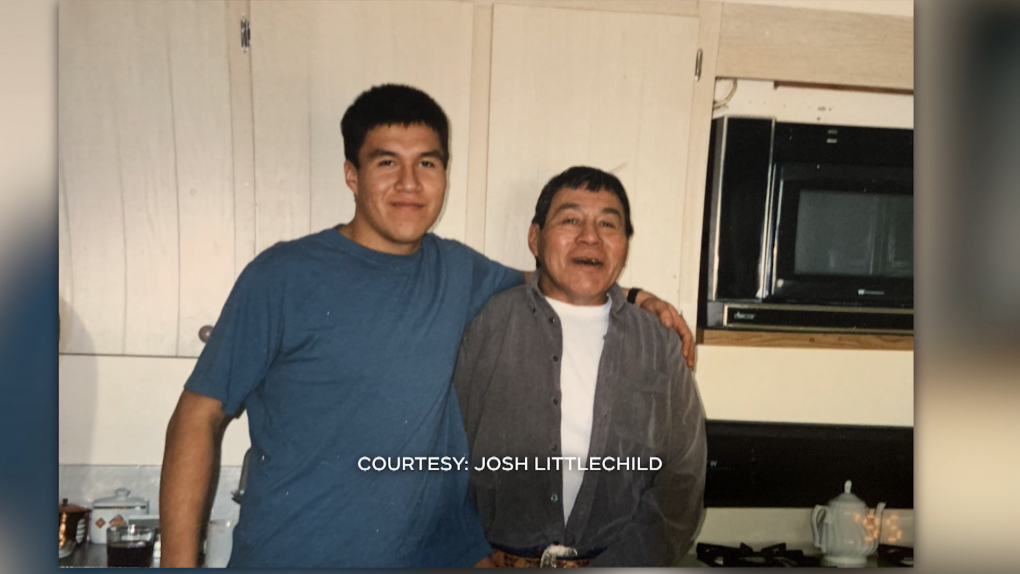 "He said, 'Son, I lived it. All those stories that you heard – all the worst of them happened to me,'" Littlechild recalled.

"After 73 years carrying this, he's only now talking about it. And for me, that gives me a lot of hope because even when I turn 80, I'll be able to still heal and let things go."

With consultation of its elders and in ceremonial fashion, Maskwacis tore down the building in the 90s and built the Ermineskin Junior Senior High School. In the decades since, on-reserve enrolment has increased from 30 per cent to 70 per cent, says Matthew Wildcat, a University of Alberta political science and native studies professor who grew up in Maskwacis. 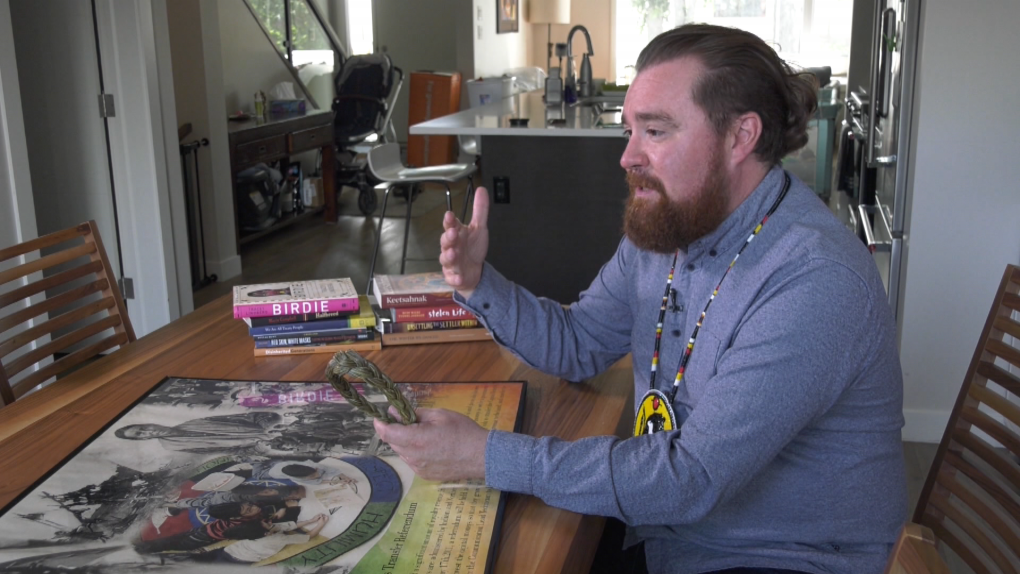 "There's a symbolism because you have a new school that's been put up in its place and it's been a school of success and a real beacon of hope, I think, for First Nation education in this country," he commented.

Ermineskin Cree Nation is also home to Chief Wilton Littlechild, the former Grand Chief of the Confederacy of Treaty Six Nations, Wildcat pointed out. Littlechild had roles in the drafting of the United Nations Declaration on the Rights of Indigenous Peoples, the repatriation of Canada's constitution, and Canada's Truth and Reconciliation Commission.

In April, Littlechild was part of the Indigenous delegation that met with Pope Francis in Rome.

An apology from the Pope has been long in the making.

The Truth and Reconciliation Commission of Canada (TRC) officially requested an apology in 2015 from the Pope "to Survivors, their families, and communities for the Roman Catholic Church’s role in the spiritual, cultural, emotional, physical, and sexual abuse of First Nations, Inuit, and Métis children in Catholic-run residential schools."

In April at the Vatican, Pope Francis apologized to the Indigenous delegation in Italian, saying he was "indignant" and "ashamed" of the abuses suffered in Canada's residential schools. He vowed to travel to Canada; advocates have said the apology to Indigenous peoples would be more meaningful on their own land.

"This is an important healing journey, but then on the other side, it's not just so people can heal. The Catholic church – there's a responsibility they have to own up to the harms that they've perpetuated against Indigenous peoples," Wildcat told CTV News Edmonton.

"In fact, we should think of it as a floor. The minimum standard of what they should be responsible for."

When the papal visit was announced in May, it was described as "a pilgrimage of healing, of reconciliation, and of hope."

And it was announced with some surprise, given the 85-year-old Pope's knee issues and recent cancellations of other international trips.

"Clearly, he is determined," Edmonton Archbishop Richard Smith, who is coordinating the trip, said in June.

He has said the Pope's itinerary is affected by Francis' limited mobility: the pontiff cannot travel by helicopter and his participation in each event will be capped at around one hour. The three Canadian cities hosting Francis – Edmonton, Quebec City and Iqaluit – were chosen as they also provide access to nearby sites, like Maskwacis, which is only 90 kilometres south of Edmonton.

As well, while in Edmonton, the Pope is scheduled to travel about 90 kilometres northwest to Lac Ste. Anne, where a pilgrimage draws thousands every year.

In Alexis Nakota Sioux Nation oral history, a Nakota chief led his people to a lake called Wakamne. A Catholic mission was established there in the 1840s and named after Saint Anne, Mary's mother. The first pilgrimage to Lac Ste. Anne was organized in 1889.

The event has grown over the years to attract as many as 40,000 people.

On July 26, marked by Catholics as the feast of Saint Anne, Pope Francis will deliver a public mass at Edmonton's Commonwealth Stadium before participating in a prayer service in Lac Ste. Anne.

"It's a significant site … which Indigenous peoples are connected to and have a relationship with Catholicism," Wildcat said, adding there exists a "real syncretism" of Catholic and Cree spiritual practices in Maskwacis, too.

"They've been married in some ways, the church and the Catholic practices with Cree spiritual practices. It's a community where they both exist."

He pointed out that a second Maskwacis nation, the Samson Cree Nation, was not Catholic when residential schools began to open. Rather than have their kids sent to a residential school elsewhere run by another church, many families converted to Catholicism so that their kids were sent to the nearby Catholic institution.

"So part of what also created this marriage between the community and Catholic church in the community is that people, they really were thinking about: how are we going to deal with this situation in the 1920s of our kids being forced to attend residential schools?" Wildcat said.

Wildcat considers the Maskwacis community perfect to host the Pope because its people "are open and willing to do an event like this" but "bring a critical eye to it about what it means."

"For many people, this apology may even bring out feelings of anger in them, because what does the apology really do?" he asked.

Similar questions are being asked by others.

"You can see the vitriol and anger expressed by a lot of people, especially over social media, of what is occurring and the very idea of the institution that perpetrated these crimes against children – you gotta remember these were children – to come in and have such lavishness and praise heaped on them for having to come and issue an apology," Cutknife said.

"But on the other hand you have the head of such a large institution coming to a small community like ours to come and express their remorse for what has occurred."

She plans on participating in the papal visit, whereas Cutknife knows he won't. Littlechild and his father hadn't decided what they wanted to do yet when he spoke with CTV, but he was hopeful his family would finally see acknowledgement of the trauma they experienced.

"Hopefully, the apology is sincere and it is heartfelt and it means a lot, because it's not just to our community, because it's to all Indigenous people," Cutknife added. "Not only in Canada, but throughout the world we've been colonized and punished for [our] beliefs and way of life as being savage."

With files from CTV News Edmonton's Nicole Lampa and Brandon Lynch and CTVNews.ca

An Ontario woman who was sexually assaulted by Hedley frontman Jacob Hoggard in a Toronto hotel room nearly six years ago says her life was 'shattered beyond recognition' as a result of the incident.

Which sponsors have pulled support for Hockey Canada?

Pressure appears to be mounting on Hockey Canada from both top corporate sponsors and political leaders, with Prime Minister Justin Trudeau suggesting that if the national hockey governing body continues to resist calls for change, the organization could be replaced. Several corporate sponsors have confirmed pulling their support. Here's what they have said about their decisions.

Bank of Canada governor Tiff Macklem says more interest rate hikes are necessary to bring inflation down, despite some early signs of a slowing economy.

The NDP are calling on the federal government to take steps to tackle 'greedflation' and get to the bottom of the rising cost of groceries.

A $1 billion class action lawsuit has been filed in the Court of King’s Bench against the Government of Manitoba and the Attorney General of Canada related to the child welfare system in Manitoba.

A former police officer facing a drug charge burst into a day care centre Thursday in Thailand, killing dozens of preschoolers and teachers and then shooting more people as he fled. At least 36 people were slain in the deadliest rampage in the nation's history.

In his first speech as sovereign, King Charles III voiced his 'love for Harry and Meghan,' signalling that tensions between the Royal Family, and Duke and Duchess of Sussex may be starting to cool. Reducing the rancour between these members of the Royal Family will be key to paving a path forward for the monarchy, says royal commentator Richard Berthelsen.

Canadian officials warn: Turkeys at U.S. border might be turned back

Ahead of Thanksgiving Day, the Canadian Food Inspection Agency is reminding cross-border shoppers that raw poultry or poultry by-products can’t be brought into the country from the U.S. due to ongoing avian flu outbreaks.

What is the Canada-U.S. Safe Third Country Agreement?

The Supreme Court of Canada will take time to weigh arguments about the constitutionality of an 18-year refugee agreement between Ottawa and Washington after hearing a challenge Thursday from claimants and human rights advocates.