Wildfire near Tomahawk smolders, full containment likely a week away

EDMONTON -- A local state of emergency remains in effect as Parkland County firefighters continue their efforts to contain the wildfire west of Tomahawk, Alta.

According to Parkland County officials, the fire continues to be held and is approximately 75 per cent contained.

The fire near Tomahawk started last Thursday and forced hundreds from their homes.

“Individuals may experience symptoms such as increased coughing, throat irritation, headaches or shortness of breath,” the air quality statement read.

Environment Canada says people with lung diseases, children, and seniors may be more susceptible to symptoms and advised people who experience symptoms to limit time outdoors.

BATTLE WITH FIRE LIKELY TO GO ON FOR ANOTHER WEEK

Officials say the local state of emergency will likely remain in place until the fire is fully contained.

“We kept that on because fire conditions can change quickly,” Parkland County Fire Chief Brian Cornforth told CTV News Edmonton in an interview.

“We’ve got a lot of fuel both inside the perimeter of this fire and outside of this perimeter so every time the winds pick up we get anxious.

Progress against the fire is also being slowed because of swampy and bog-like areas where only firefighters using hand lines can access.

“Heavy equipment is not an option there,” he said.

“Ideally, we would like to be out of here in a few more days,” Cornforth added. “This could be anywhere from a week to a week and a half to fully extinguishing this fire.”

Cornforth said that damage assessments are underway. Two residences were lost in the fire and several outbuildings, shops, tack sheds, and gardening sheds.

Kathleen Dumas was one of the home owners who returned after being evacuated to nothing.

The place Dumas and her three-year-old son called home was reduced to ash and twisted metal.

“It’s just devastating that all that hard work, just in one second, is gone,” Dumas said tearfully. “That’s my whole life.

“I was expecting to see building (when I returned) and there’s nothing. It’s like my heart broke into a thousand pieces.” 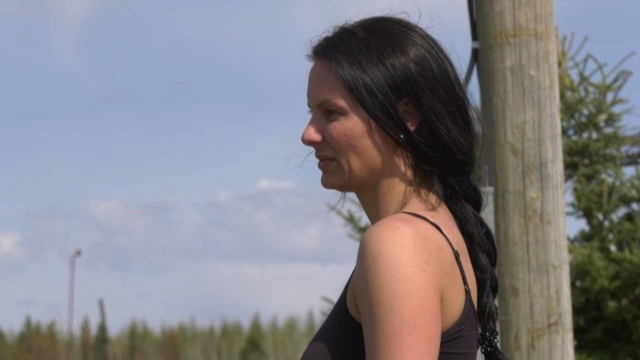 Kathleen Dumas looks at what little remains of her home. Dumas was one of the local residents who returned after being evacuated to nothing (CTV News Edmonton).

Dumas is a nurse working in Drayton Valley and is used to helping people. Now people are helping her.

A GoFundMe has been started to support Dumas rebuilding efforts and her three-year-old son. Over $4,500 has been raised so far.

“They’re gonna stop what they’re doing and be here for (me),” Dumas said. “This is how amazing this community are.”