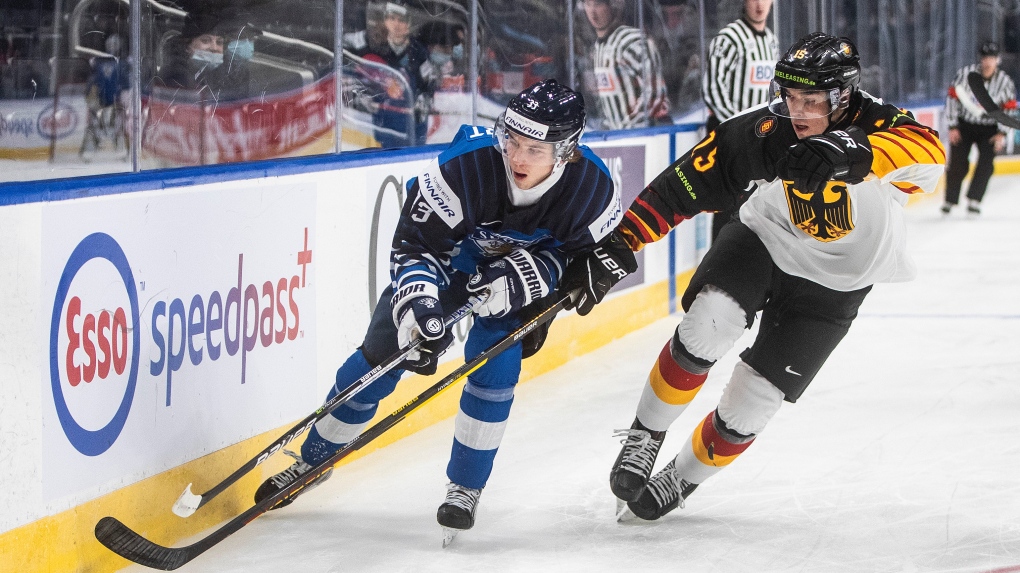 The six-foot-three-inch tall defenceman scored Germany’s only goal and was named his team’s player of the game in the World Juniors opener, a 3-1 defeat to Finland.

“The opening game of the World Juniors tournament,” he said. “That was a pretty exciting game for myself and for us as a team too.”

A year after making his World Juniors debut in Edmonton, Munzenberger has helped his German side to within a win of a quarterfinal spot for the second year in a row.

“It felt pretty huge to be in a big arena here with at least a couple of fans in there,” he said of returning for this year’s tournament.

He and his teammates rebounded with an upset 2-1 overtime win over Czechia on Monday night, where Munzenberger recorded an assist and led his team in ice time for a second straight game.

The win moved Germany to third in the group with tonight’s game against Canada and Friday’s matchup against Austria to go.

“It’s huge,” he said of the win. “Because we now have a game against Canada. We want to win that one, but it’s going to be tough.”

His size makes him hard to miss, but you might have spotted him as Jan-Luca Munzenberger as he was listed on some rosters at last year’s event.

He prefers the shorter Luca and says his parents added the second first name to comply with a German naming convention whereby first names must be unambiguous in their gender.

“They would've just named me Luca if that would have been possible.”

He says he’d never played as many minutes as he did in the first three games of last year’s tournament, when nine positive COVID-19 tests left the team with just 14 skaters, instead of the usual 23, for its first three games.

“The first game was really tough coming out of quarantine, we didn’t practice much,” he remembered of a 5-3 Christmas Day defeat to Finland.

The shorthanded Germans ran out of gas a day later against Canada, getting blown out 16-2.

“We were all tired and it didn’t work out too well.”

A more rested Team Germany came back two days later and racked up back-to-back wins against Slovakia and Switzerland to put them in the quarterfinals for the first time.

“We felt that we could have maybe got the second goal and maybe tied it up.”

The sting of defeat was softened by a scholarship offer from the University of Vermont soon after the tournament.

Munzenberger has completed  his first semester there, studying business administration, and has two points and 29 penalty minutes in 15 games for the Catamounts.

Munzenberger is among the latest generation of German talent looking to crack the National Hockey League.

Once an apparent perennial hockey doormat, the country captured the silver medal at the Pyeongchang Olympics in 2018 and upset Canada on its way to a fourth-placed finish at last year’s IIHF World Championship.

“It's a lot about how the coaching and practices have improved throughout the last few years,” he said.

“The (German) league has improved throughout the last few years. And, especially because of COVID, a lot of young guys get the chance to play in the pro league at a very young age.”

That bodes well for the country’s junior team that Munzenberger says is drawing from the adversity of last year.

“We know that we can handle a lot of the teams here even though we didn’t play our best game or we didn’t have all the players we could have had,” he said.

“That gives a lot of confidence going into the game against Canada.”

Munzenberger characterizes the team’s following game against Austria on Dec. 31 as its first playoff game in its quest for the quarterfinals, and chance to make German hockey history for a second time.

“It's just one game and you can get a lucky punch,” he said.

“Everything's possible if you make the quarterfinals”

Two people were killed and around 10 wounded on Saturday in a shooting at a nightclub in Norway's capital Oslo, Norwegian police said.