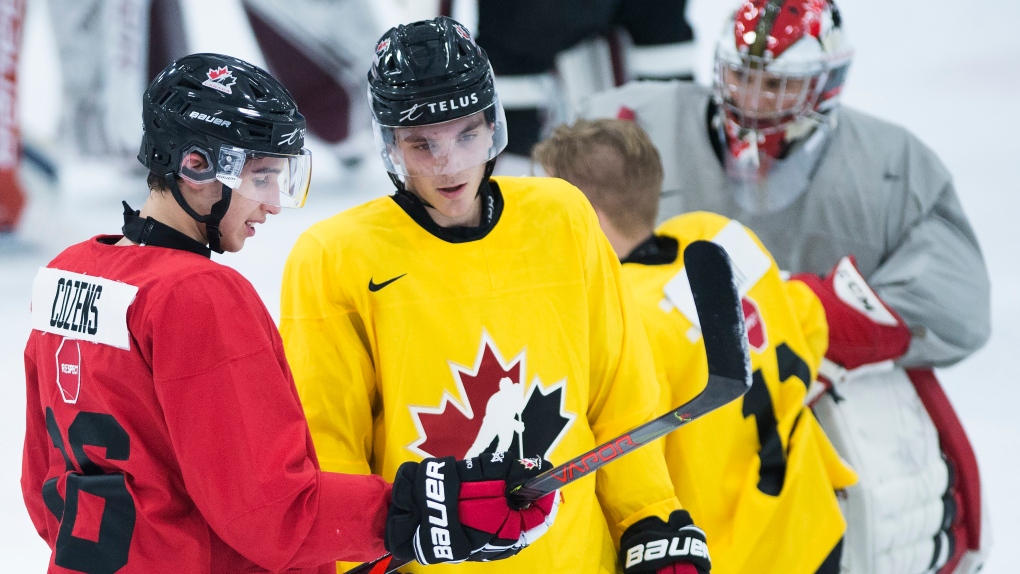 Dylan Cozens, left, talks with Peyton Krebs, right, during practice at Team Canada's selection camp in 2019. Both players have a chance to return to the team for this year's tournament. (THE CANADIAN PRESS/Nathan Denette)

According to Hockey Canada, camp officials learned of the positive results Tuesday morning and the players were sent into quarantine.

All camp activities were suspended for the day, and the Red-White game scheduled for Tuesday morning in Red Deer’s Westerner Park Centrium was postponed.

"The quick identification of these cases and rapid response is proof that the measures put in place are working," AHS spokesperson Tom McMillan told TSN reporter Ryan Rishaug.

He added that in a setting with as aggressive testing as the Team Canada camp, a "small number of cases is not unexpected."

All players, coaches and staff were tested for the disease when they arrived at the camp.

“For precautionary reasons, we will also ensure that all players and team personnel go through an additional test before resuming camp activities,” a statement from the organization read.

“The appropriate local and provincial health authorities have been made aware of the situation, and we will continue to work closely with Alberta Health Services.”

According to AHS, there is no specific threshold at which AHS would recommend the camp shut down.

"That judgement would be made based on the public health risk presented and occur in discussion with organizers," McMillan said.

"We are working closely with Health Canada to adapt to the quarantine requirements and support the health of everyone involved."

Playors and staff have been allowed to leave the camp bubble, but have needed to take another COVID-19 test when they returned. All players and staff were supposed to receive a routine test every three to four days, according to Hockey Canada. They are also expected to follow all other public health measures, like physical distancing and mask wearing.