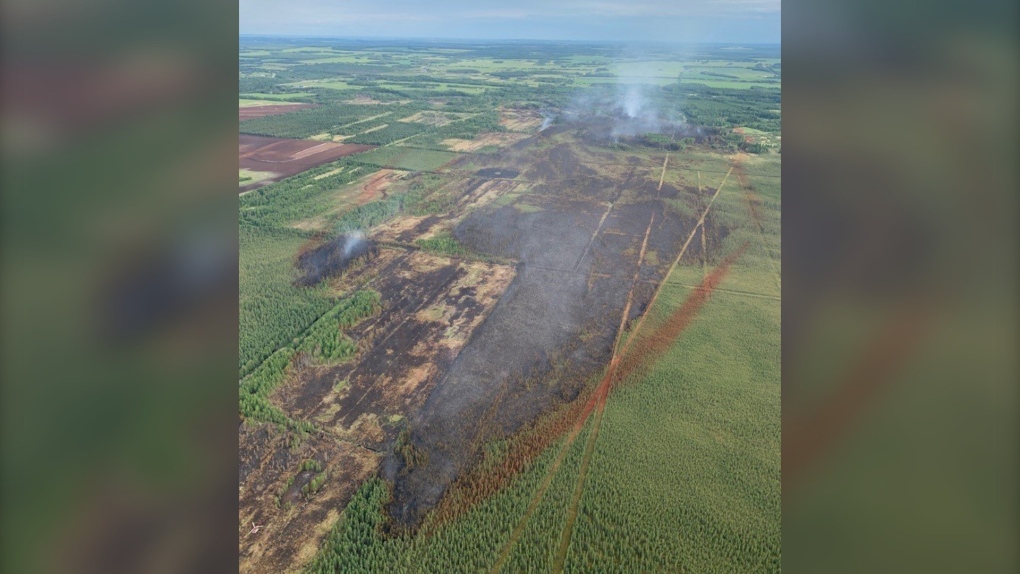 Alberta Wildfire said there was very little fire activity at a 180-hectare wildfire west of Evansburg on June 24, 2021, but that it continued to smolder. (Source: Alberta Wildfire)

EDMONTON -- An out-of-control wildfire west of Edmonton held its size over Wednesday night at 180 hectares, but mostly only smoldered the next day.

Officials said in an update Thursday morning there was very little fire activity or smoke, and no open flame visible at the scene nine kilometres west of Evansburg. By evening, that had changed slightly: Alberta Wildfire noted "some open flame in the inside of the perimeter of the fire but very little fire activity or smoke is observed near the perimeter.

"The fire is mostly smoldering on the ground."

The wildfire had crossed the Lobstick River but not Highway 16.

Thirty-four firefighters spent the day searching for and extinguishing hotspots. They made "good progress" making wet lines on Wednesday to contain the fire and continued with the effort Thursday, with help from helicopters bucketing, Alberta Wildfire said.

More than 50 firefighters were expected to be working on Friday. As well, four helicopters will be helping on Thursday and six pieces of heavy equipment are on standby.

The provincial crews are assisting six units from Yellowhead County.

The rural municipality ended a state of local emergency at 6 p.m. and an evacuation alert that had been an order just one day earlier.

"It has been determined that the wildfire is no longer a threat to the community," a statement from the county read.

However, sprinkler systems will remain on houses over the weekend and the county will test them each morning.

Highway 16A from Highway 22 west to Lobstick remained closed for a portion of Thursday, and Alberta 511 warned drivers in the Entwistle and surrounding area of poor visibility due to smoke.

The Yellowhead County evacuation call centre was closed, too. Residents needing more information were asked to call the administration office in Edson at 780-723-4800.