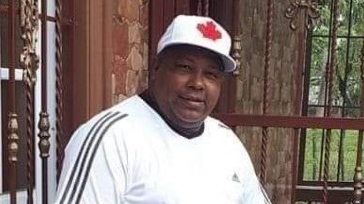 Henry De Leon had been working at the Olymel plant since December 2005 after arriving to Canada from the Dominican Republic as a foreign worker 16 years ago. (Provided Image)

In total, three deaths have now been connected to the central Alberta plant, after a COVID-19 outbreak was declared Nov. 17.

The union that represents the facility's workers told CTV News Edmonton Friday an employee from the plant died from COVID-19 earlier this week.

De Leon was in his 50s, according to Alberta Health.

“We’d made ongoing demands for a temporary closure of this Plant to ensure everyone’s safety. Instead, the Company sat on its hands and did little or nothing. Now we’re grieving a second death that might have been prevented.”

Union officials say they're in the process of investigating the circumstances surrounding De Leon's death.

They add that he contracted COVID-19 shortly after the union proposed a temporary closure of the plant to the company.

“We meant it when we said that we didn’t want this to turn into another Cargill,” Richelle Stewart, secretary treasurer for the union said in the statement. “Our union has lived through this horror before. We know the early warning signs. We tried to get anyone we could to listen. But here we are again, and I’m left wondering: when will big corporations and the Government of Alberta learn?”

De Leon had been working at the Olymel plant since December 2005 after arriving to Canada from the Dominican Republic as a foreign worker 16 years ago.

He is survived by his wife, two grown children and two grandchildren.

"Olymel would like to express that we are deeply saddened by the loss of this employee and offer our sincere condolences to the family and all of our workers at this time," Olymel spokesperson Richard Vigneault said in a written statement to CTV News Edmonton.

In a written statement, Tom McMillan from Alberta Health said a woman in her 60s died from COVID-19 Sunday.

This is the third reported COVID-19 death linked to the outbreak at the Olymel meat processing plant in Red Deer.