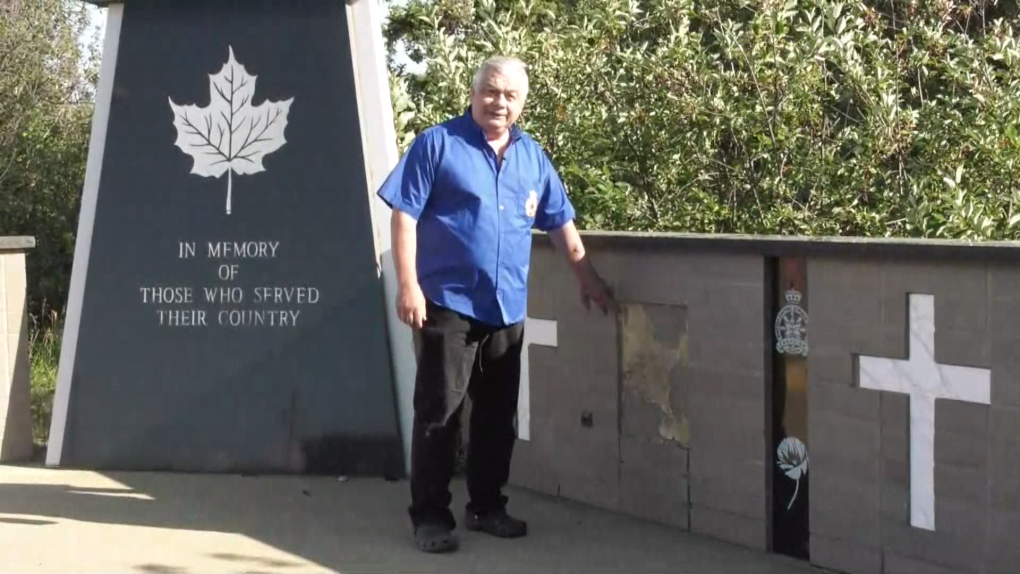 A Royal Canadian Legion branch in Edmonton is pleading for the return of stolen plaques from its cenotaph and 10,000 poppies from its building.

Wes Hyshka, past president of the Norwood Legion Branch 178, told CTV News Edmonton that the cenotaph memorializing the sacrifices of those who died while serving Canada in wars was vandalized

Two bronze plaques were removed and taken from the monument. One plaque thanked community members who donated to help support building the cenotaph over 60 years ago. The other plaque honoured the sacrifices of soldiers from the First World War.

“It breaks our hearts,” Hyshka said. “I’m a veteran myself.

“For someone to desecrate something that means so much to me and the community,” Hyshka added, “is devastating.”

Additionally, graffiti was sprayed over parts of the monument.

Hyshka said the legion branch estimates the cost of replacement plaques and cenotaph repairs to be more than $7,000.

For Hyshka, the vandalism was saddening to see, especially after the legion branch had two break-ins to their building this week, resulting in the theft of 10,000 poppies.

“That means we are going to have to reorder and take the hit on ourselves,” he said. “Money earned from poppies goes to the poppy fund which is to help veterans, past and the ones that are serving and their spouses, as well as the community.

“That is a big hit,” Hyshka added. “What are they gonna go do with it? Are they going to go ahead and sit and set up their own poppy boxes and collect the money that should be going to the veterans?

“We are so tired of this. We are being hit, vandalized. The money that we would normally give out to the community we are having to replace stuff just to operate now.”

World expected to consume twice as much seafood by 2050, new findings suggest

The world will consume twice as much seafood by 2050, according to new research. But despite the increased demand, a stronger turn to sustainable fishing could help address malnutrition and lower our overall environmental footprint.

Kingston police, with assistance from the OPP riot squad and Durham Regional Police, moved in twice on Saturday to clear students from the streets and homes after declaring an 'aggravated nuisance party'.