EDMONTON -- In the absence of new pandemic modelling by the United Conservative government, the Alberta NDP is pointing to capacity projections by Alberta Health Services which estimate the province could be close to breaching its regular ICU capacity by the middle of December.

The data – which the NDP says was leaked by health care workers – comes from AHS’ early warning system, a point-in-time tool it uses to forecast hospitalization and ICU rates on an ongoing basis.

On Nov. 24, the system projected Alberta could have fewer than 330 COVID-19 non-ICU hospitalizations in a best-case scenario, about 410 in the mid-level scenario, or more than 500 in the worst-case scenario come Dec. 1. 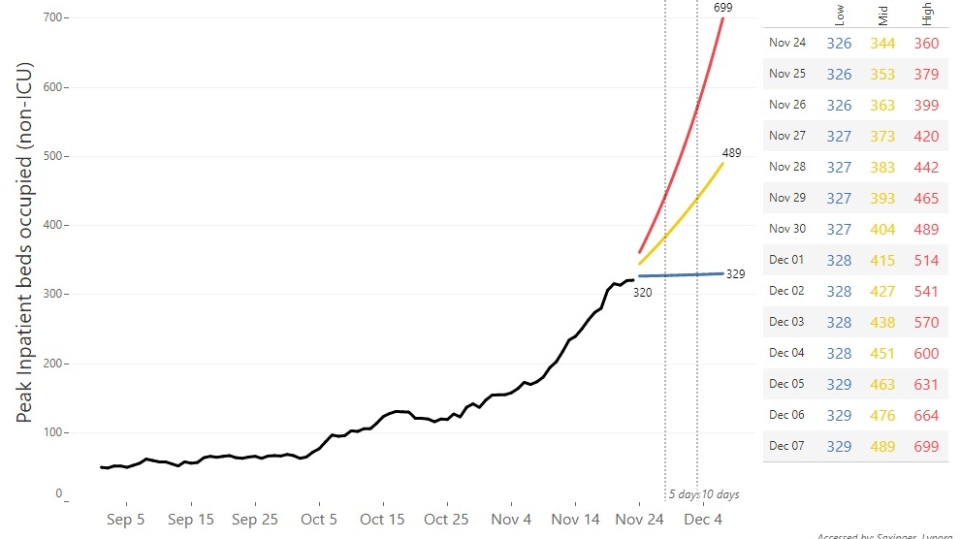 On Tuesday, the province marked the start of the month by reporting a new total of 16,628 active cases and 382 non-ICU hospitalizations – landing just above AHS’ mid-level estimate made one week earlier.

The same projection estimated ICU hospitalizations by Dec. 1 could number between 61 and the low-90s.

A newer forecast by the AHS system says as many as 161 Albertans could be in ICUs with COVID-19 by Dec. 14. 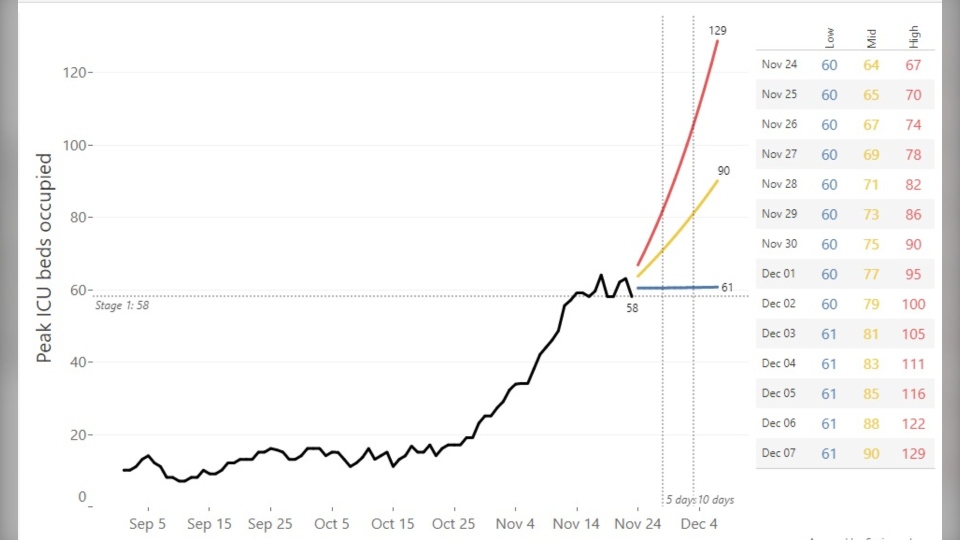 The scenario would mean just 12 of the province’s pre-pandemic 173 ICU beds would be free for patients suffering from something other than COVID-19. Within a few weeks, Alberta will grow its number of ICU spaces to 425 and acute care beds to 2,250 by double-bunking patients, moving acute care patients to continuing care facilities in the community, and setting up ICU beds in non-traditional spaces, like post-operation recovery rooms.

As the system grows its capacity, COVID-19 will grow, too, estimated the AHS tool. It projected up to 775 Albertans with COVID-19 will be in non-ICU hospital beds by mid-December. 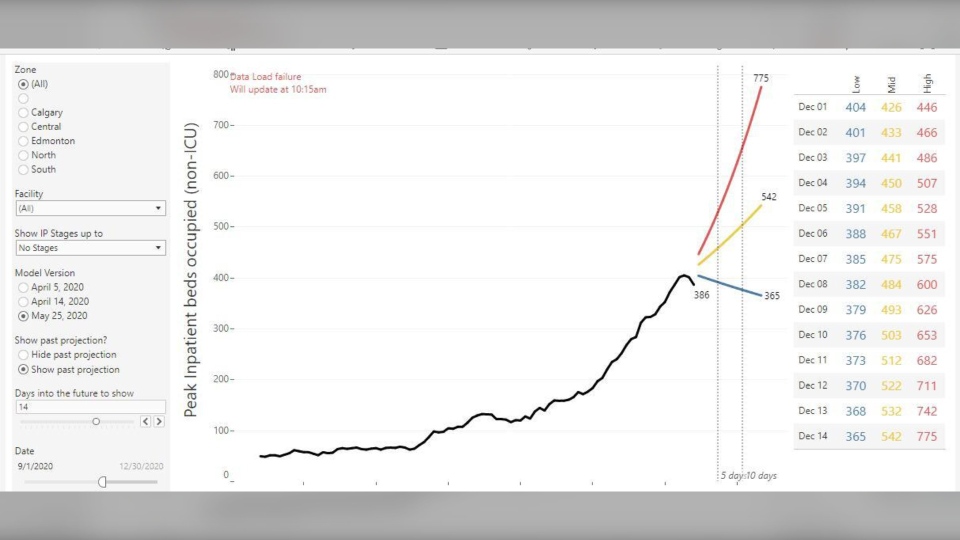 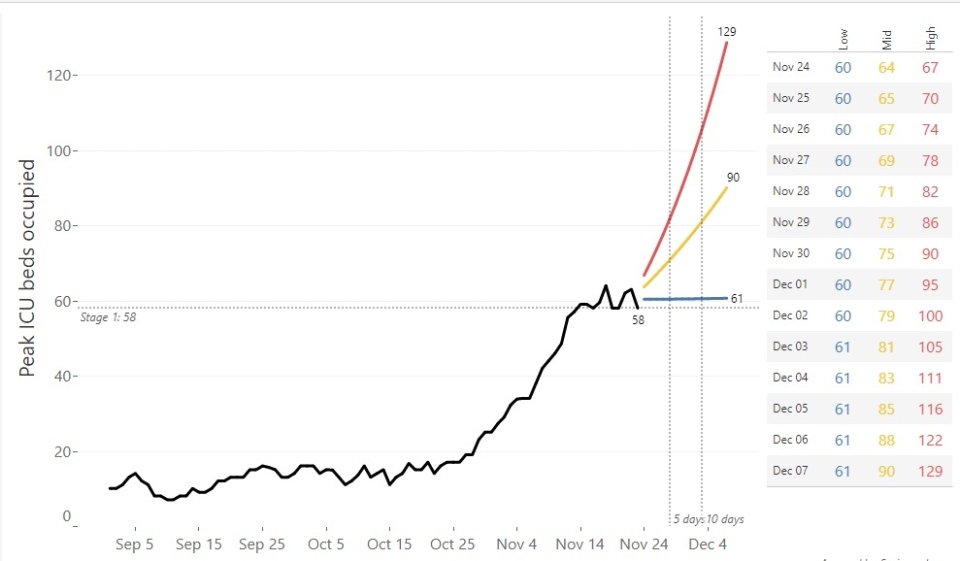 NO PLAN TO UPDATE MODELLING: GOVERNMENT

“The modelling in the spring was based on assumptions that turned out to be far from reality and there are no current plans to repeat or update it,” Alberta Health spokesperson Steve Buick told CTV News Edmonton.

“The information below is AHS’s internal short-term forecasts of needs based on recent data; they do that kind of work at any time when demands on the system are high to support operational planning.”

However, the NDP Opposition’s health critic said the AHS numbers are proof “we’ve not yet hit the crest of this tsunami.”

“(The government has) refused to be transparent with Albertans about what they knew the potential outcomes would be about what these extrapolations – whatever you want to call them – could lead to,” Edmonton-Centre MLA David Shepherd commented.

In recent weeks, the government’s stance has been that there is no benefit to updating the spring models. During the Oct. 20 question period, Premier Jason Kenney told the legislature he was unaware of any COVID-19 projections in the world that have “come remotely close to reality,” and that Alberta’s April forecasts were off by a factor of 95 per cent. An Alberta Health spokesperson would tell CTV News Edmonton on Nov. 19 that there is no plan to update April's projections and that “should the Alberta government determine there would be a public health benefit to updating it, we’ll share it.”

The government has also rejected the NDP’s claims that it is hiding information from Albertans. The premier said in the legislature on Tuesday that it was the province’s “comprehensive” data which had allowed Albertans to watch active cases, fatalities, hospitalizations and recoveries tick up in recent weeks.

“In fact, just a few days ago, we announced the most dramatic measures that affect the exercise of basic personal liberties in the history of the province of Alberta, and the NDP refers to that as libertarian extremism. What kind of Alice in Wonderland world do they inhabit?” Kenney asked.

THE POTENTIAL EFFECT OF ALBERTA’S RESTRICTIONS

AHS’ early warning system does not make its calculations based on the potential impact of Alberta’s public health measures.

As Chief Medical Officer of Health Dr. Deena Hinshaw explained it on Tuesday, the forecasts are based on current trajectory and show what bed capacity could be needed if those growth trends were to continue.

Officials said the system was used to help plan for changes in demand – even the most intensive of which the province says it is prepared for.

“The work that we’ve been doing with Alberta Health Services to make sure that the system is prepared should those cases continue to rise is an important part of preparation, but the question of whether we track on the high, medium or low line, that really is in the hands of all Albertans,” Hinshaw commented Tuesday.

According to the top doctor, the end of the week was the earliest officials could begin to see the impact, if any, of the province’s newest restrictions. Gathering and business restrictions came into effect the previous week, and on Monday junior and senior high school students began at-home schooling until January.

“If we want Albertans to understand the gravity of our situation, if we want them to take what action is within their grasp and their hands to help us address and bring this curve down, then we need to be open with them about what the implications are and what the impacts will be,” he told CTV News Edmonton.

Most recently, 20 critical care beds opened in Edmonton and 10 in Calgary. To bring thousands more beds online in future weeks, patients will be moved to new facilities and those waiting for non-emergent surgeries may see their dates postponed. In Edmonton, about 30 per cent of non-urgent surgeries are being pushed back.

The province will also have to work to grow its number of acute and critical care staff.

“When we talk about an ICU bed, it’s not just a bed. It’s also a number of staff that are there to provide support. It’s the oxygen supply. It’s the ventilators. It’s all of those pieces that have to work together in an interdependent system,” Shepherd said.

“Unfortunately what we’ve seen is this government has treated it sort of like, ‘We’ve got buffer capacity. We’ve got a bit of room we can push that red line a little bit.’”