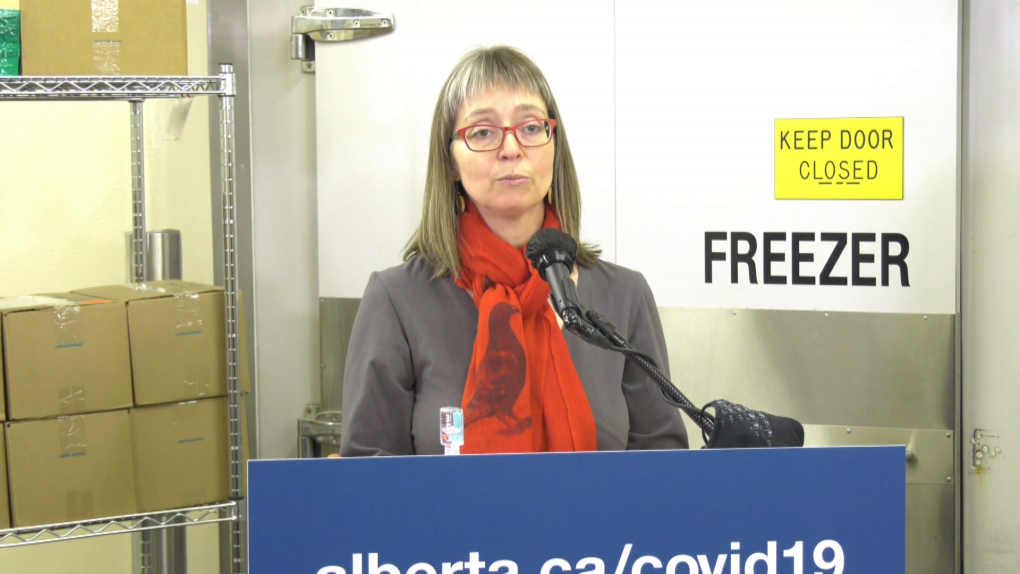 Alberta Chief Medical Officer of Health Dr. Deena Hinshaw reports 1,887 new cases of COVID-19 in the province on Dec. 14, 2020, as officials prepare to receive the first doses of the Pfizer vaccine in Edmonton and Calgary.

EDMONTON -- While readying freezers for the first doses of a COVID-19 vaccine, Alberta confirmed 1,887 new cases of the disease -- the most it had ever counted in a 24-hour period.

On Monday, the province's chief medical officer of health reported 20,000 tests had been done on Sunday.

Of 716 people in hospital with the disease, 136 were in ICUs. The province's positivity rate sat at about eight per cent.

There were also 15 more COVID-19-related deaths.

'A PLATEAU IS NOT ENOUGH': HINSHAW

Dr. Deena Hinshaw reported the numbers at a news conference during which Health Minister Tyler Shandro announced the first doses of Pfizer's vaccine were about to arrive in the province, and that his department was preparing to receive thousands more next week.

Shandro warned despite the vaccine's arrival, the weeks ahead would be Alberta's "toughest yet."

Hinshaw echoed this, explaining the province had only managed to plateau its rising cases, not bend down the curve.

On Monday, the province's reproductive value, or R-value, for COVID-19 -- measured over the previous seven days -- was 0.98.

"This metric of R describes whether the rate of transmission over the past week increased, decreased or stayed the same. For example, if the R-value was one, then an infected person has infected about one other person on average. If it's above one, the spread grew. If it's below, then we saw a decrease," Hinshaw explained.

"What last week's values seemed to indicate is that cases plateaued over the week. This is certainly better than an increase, but as the minister mentioned, a plateau is not enough. And a single week's R-value does not tell us about a trend."

According to Alberta's top doctor, officials look at the R-value in combination with daily case counts -- which have remained high enough in Alberta in recent weeks to land the province in first place for total active cases in the country.

"What we need to achieve together is several weeks of an R-value well below one with a corresponding decrease in new case numbers. At present, even with this single-week plateau, we are continuing to see growing hospitalizations and ICU admissions which are straining our health system," Hinshaw said.

"We all must keep doing our part."

She wants to see the province reach an R-value of 0.8.