EDMONTON -- Beyond the privacy concerns and since-resolved technical challenges that came with the launch of Alberta’s new contact tracing app, there are also a few practical limitations some believe could limit its user-friendliness.

AB TraceTogether, a rebranded modification of an app launched in Singapore in March, uses Bluetooth technology to help prevent the spread of COVID-19 by creating a so-called 'digital handshake’ with other users.

If someone tests positive for COVID-19, the user can consent to releasing information collected through the app to Alberta Health Services in order to alert any close contacts the individual had over the previous 21 days.

Those close contacts also would have needed to be using the app. In order to create a ‘digital handshake’, two users have to both be using the app and be in close proximity to one another for at least 15 minutes.

For example, it might connect with another user over the course of 90-minute movie in a theatre, but not if you’re momentarily browsing near someone at a retail outlet.

There are more limitations for Apple iPhone users.

According to the government of Alberta, due to Apple’s bluetooth functionality restrictions, the TraceTogether app cannot operate in the background of iOS devices.

That means any users of the app who have an iPhone must have the app running on their screen to allow it to effectively communicate with other devices (the app can function in the background of Android devices).

iOS screens must also remain unlocked for it to work. The government's website recommends people keep their devices face down or upside down to keep the app running. 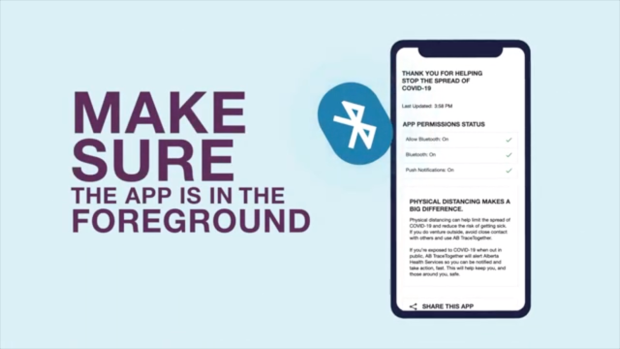 “For the roughly half of Albertans who use iOS, if they have a smartphone, that’s going to be problematic,” said Peter McCaffrey, founder of Alberta Institute, a libertarian-minded think-tank.

A spokesperson for a Victoria-based app developer says the TraceTogther app appears to function well, but its user convenience is held back by the iOS Bluetooth restrictions.

“It’s really easy to close the app or forget that you’re supposed to be using it, essentially,” said Desmond Brisbin with FreshWorks Studio.

A spokesperson for the Alberta government said the bluetooth restriction is not unique to Alberta’s version of the app.

Phelps said Apple was aware of the issue and expected the company to fix the issue in an upcoming iOS software update.

Since its launch last Friday, AB TraceTogether has been downloaded more than 125,000 times — or nearly three per cent of Alberta’s population.

As a comparison, Australia hopes to have 40 per cent of its population using its Bluetooth-enabled COVID Safe application to consider it successful.

The same target in Alberta would equate to roughly 1.7 million people needing to download and use the app.

“And then half of those people who do have a smartphone are going to struggle to use if effectively. It’s going to be very challenging to hit that 40 per cent, if that is the target,” said McCaffrey.

The app was repurposed for Alberta Health by Deloitte at a cost of $625,000.