EDMONTON -- Kendall Diwisch was doing the rounds near one of his wells near Drayton Valley Wednesday morning when he discovered something unusual.

Three cats he believes were abandoned had their tails stuck under ice. Diwisch told CTV News Edmonton he got one of them out easily, but the other two required some work.

He threw some lukewarm coffee on their tails, pulled a little bit, and "they came out pretty good," Diwisch said.

"They were shivering a bit," Diwisch added. "Good thing it wasn't last week when it was -30C, otherwise it would be a different outcome."

Diwisch took all three cats home and gave them food, water, and a dewormer — getting ready for their forever home.

It didn't take long. His Facebook post has been shared more than 1,000 times, and a family who lost their cat in the fall said it would take all three. 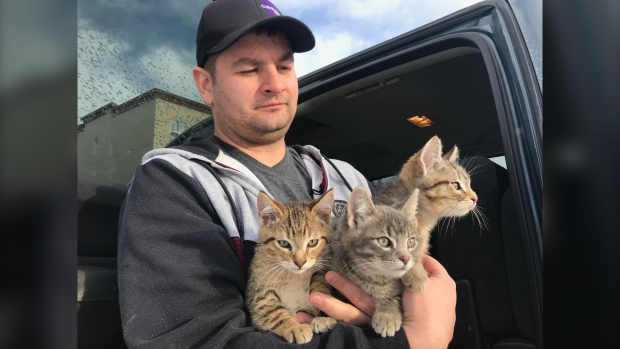 "They are all excited," Diwisch said.

On Thursday afternoon, Diwisch posted an update to Facebook saying "all three little rascals went to their new home today where they get to be together instead of separating them."

Diwisch received hundreds of comments praising him for saving the cats. "You're a hero," one person said. "Thank you for being an amazing human," another person added.