Alta. minister thanks convoys, says COVID-19 restrictions were 'about political control and power'

Alta. minister thanks convoys, says COVID-19 restrictions were 'about political control and power'

Kaycee Madu, Alberta's labour and immigration minister, ignited a firestorm Tuesday afternoon when he thanked "freedom convoys" for fighting against "tyrannical" federal COVID-19 restrictions that are soon to be loosened.

He added that Ottawa's vaccination rules regarding international travel were never "about science but about political control and power." 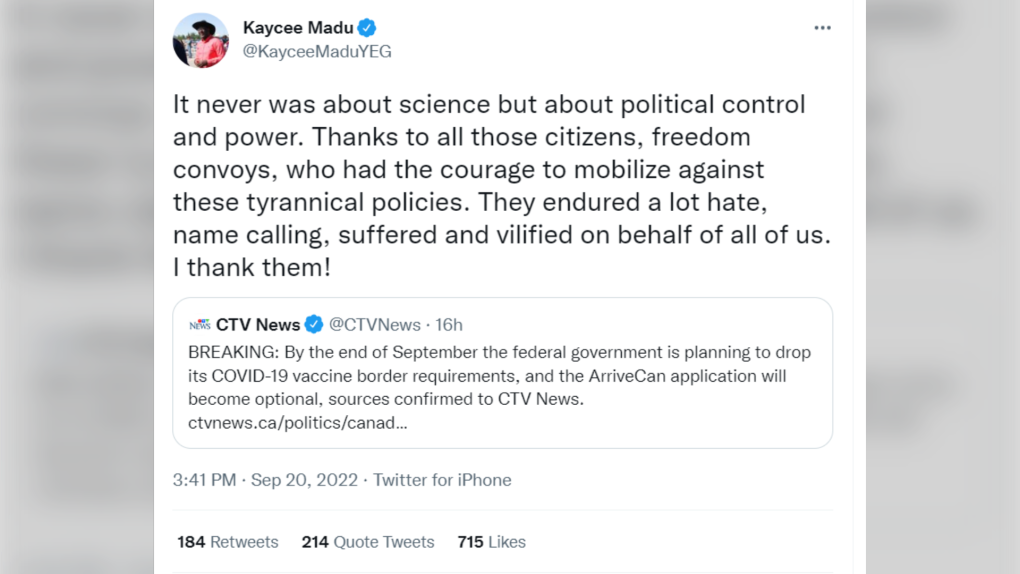 Kaycee Madu, Alberta's labour and immigration minister, ignited a firestorm Sept. 20, 2022, when he tweeted thanks to the "freedom convoys" for fighting against "tyrannical" federal COVID-19 restrictions.

The Alberta NDP called on Premier Jason Kenney to remove Madu from cabinet.

"Frankly, it's a new low for this minister," Justice Critic Irfan Sabir told CTV News Edmonton. "Essentially he is thanking Freedom Convoy people who were responsible for a whole lot of lawlessness in this country."

Sabir added: "These comments are way over the line. They're disrespectful to many, many Albertans who fell sick, who lost loved ones, who lost jobs and businesses."

Kenney declined to comment on his minister's gratitude to convoy participants, telling media on Wednesday he doesn't monitor Twitter and "if you want to hear Minister Madu's views, or clarification from him, I suggest you talk to him."

He did, however, side with Madu on federal public health measures, claiming in December during consultations with the premiers, Prime Minister Justin Trudeau said the federal government needed "to be seen to be doing something."

"It's no secret our government has been consistently opposed to unnecessary federal travel restrictions, specifically the ones still in place that were implemented in December of last year. I told the prime minister directly, as did, I think, virtually all of the premiers, that there was no scientific rationale," Kenney recalled.

"It's been clear to me from the beginning that at least this latest round of travel restrictions were political and optical, not about reducing transmission."

Convoy protesters flooded the streets of Ottawa for several weeks and blocked international borders in Alberta, Manitoba and Ontario. Four men were charged with conspiracy to commit murder after they were arrested at the Alberta blockade in February.

"I believe the restrictions that were there federally were based on the advice the federal government was getting from their health experts," Sabir said.

Madu served as justice minister in Alberta until he was forced to take a "leave of absence" from the post in January. During a COVID-19 update on May 5, 2021, he said Albertans needed to follow provincial restrictions.

"It is my expectation that law enforcement and the crown prosecution service would deploy all tools available to them to ensure that the public health orders are enforced," Madu said, in a video shared Tuesday by journalist Catherine Griwkowsky.

CTV News Edmonton reached out to the premier's office about Madu's comments and also requested an interview with Madu.

'HE IS NOT GOING TO WIN HIS SEAT': BRATT

Madu's newest comments are "inflammatory," a Calgary-based political scientist said, adding his statement puts the UCP government in a tough spot after imposing their own COVID-19 rules.

Kenney suggested "provincial measures are of an entirely different nature because the provinces are responsible for the health-care system."

Madu has been a "lightning rod" for controversy since he was elected in Edmonton- South West in 2019, Bratt added.

In May 2021, Madu apologized for saying the opposition NDP and federal Liberals, along with the media, want the province's health-care system to collapse from the COVID-19 pandemic.

In February, a retired judge found that Madu tried to "interfere in the administration of justice" over a distracted driving ticket. Kenney removed him as justice minister and immediately appointed him as head of labour and immigration.

"This is a very extreme position for Kaycee Madu to be taking and one that could jeopardize the future electoral fortunes of the UCP," she told CTV News Edmonton.

"If Danielle Smith were to come to the premiership, (Madu) would be kept in cabinet and likely elevated. If Travis Toews, or let's say Rebecca Schulz, becomes the next premier then I think it's a harder thing to keep Kaycee Madu in cabinet," Williams said.

Online reaction to Madu's tweet was swift, and largely critical:

Southwest #yeg your MLA is an unmitigated embarrassment. #ableg https://t.co/Bn9zF7ACgO

Written like a justice minister who has been found attempting to subvert the course of justice. What a disgrace https://t.co/N9AlfVNGxI

I am so looking forward to Madu losing his seat in the 2023 election.

Like I’m damn near giddy about it. Make it so, #yeg. #ableg https://t.co/pFEYNZ4AWR

Actress Kirstie Alley has died after a brief battle with cancer, her children True and Lillie Parker announced on her social media.