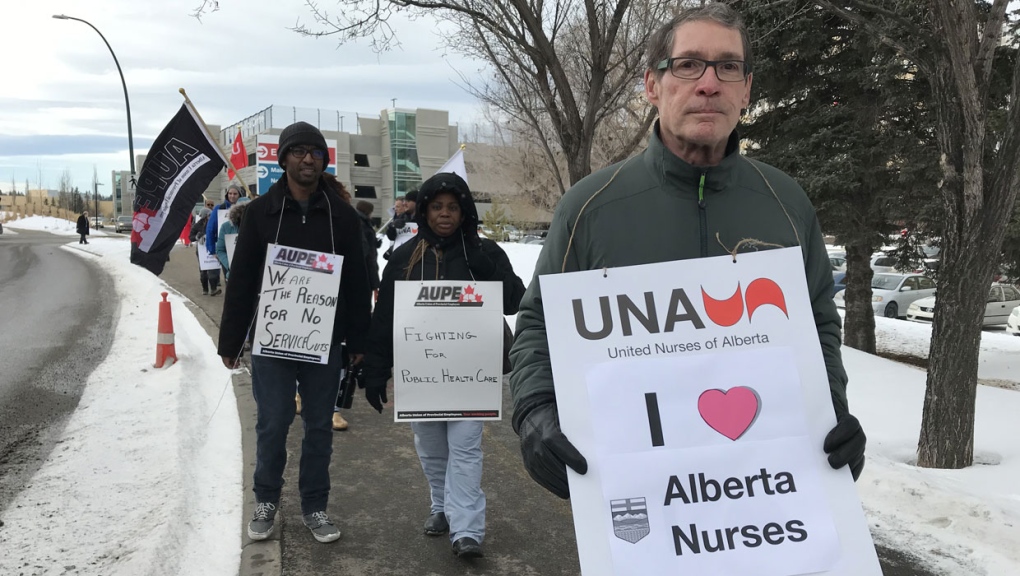 Thousands of supporters of Alberta's health-care workers staged demonstrations throughout the province on Thursday to protest cuts by the Kenney government.

Alberta's nurses have overwhelmingly ratified a new collective bargaining agreement, closing the book on what the union calls some of the most contentious and bruising negotiations in its history.

The vote was 87 per cent in favour of a four-year deal that includes a 4.25 per cent pay bump over the course of the contract.

“The bargaining committee felt strongly the mediator's recommendation issued on Dec. 21 was a fair deal that will benefit our members and also fair to the people of Alberta,” Heather Smith, president of the United Nurses of Alberta, said in a statement Thursday.

The UNA statement said the vote “brings to an end one of the most prolonged and arduous negotiations in the provincial nursing union's 44-year history.”

It includes a one-time lump sum payment of one per cent for 2021 in recognition of nurses' contributions during the COVID-19 pandemic.

There will also be more psychological and mental health supports for nurses and the creation of a union-employer workload advisory committee.

The deal was agreed to by 130 affected UNA locals, whose members make up the bulk of the union's 30,000 registered nurses and registered psychiatric nurses.

Premier Jason Kenney's government had been seeking a three per cent wage cut and other contract rollbacks from nurses, arguing that Alberta's nurses were paid more than those in other jurisdictions and that a tight budget required concessions.

“Alberta can no longer afford to be an outlier,” Finance Minister Travis Toews said in a statement as late as July 6, 2021.

Toews suggested at one point that nurses were putting their needs ahead of their patients' by pushing to resume collective bargaining during the pandemic.

The union, in turn, accused Toews of “grossly insulting” hypocrisy from a government that found time for collective talks with physicians and other public sector unions, but not for nurses.

It was a high-wire tightrope situation for the government, demanding wage clawbacks from nurses battling COVID-19 on the front lines while also risking the possibility of a nurses strike during a pandemic.

“Alberta Health Services' willingness to move away from its initial demands for wage cuts and to drop its efforts to impose more than 200 rollbacks made this agreement possible,” said David Harrigan, who led the UNA's bargaining committee.

Kenney told reporters that the deal respects the work of nurses while also meeting the government's goal to rein in budget spending.

“I believe that this collective bargaining agreement is a win-win,” Kenney said late Thursday.

“It ensures that Alberta nurses continue to be the best-compensated in Canada (and) at the same time it brings their compensation closer to the national average in other provinces.”

This report by The Canadian Press was first published Jan. 27, 2022.

Texas gunman was inside the school for over an hour

The gunman who massacred 19 children and two teachers at a Texas elementary school was inside for more than an hour before he was killed in a shootout, law enforcement authorities said Thursday amid mounting public anger and scrutiny over their response to the rampage.

There are now 26 confirmed cases of monkeypox in Canada, according to an update from the Public Health Agency of Canada, and the virus has been detected in a new province, with one case in Ontario.

In the wake of a horrific mass shooting at an elementary school in Texas, Prime Minister Justin Trudeau has signalled that the Canadian government will be moving ahead on new gun-control measures 'in the coming weeks.' In previous Parliaments, the Liberals have made changes to Canada's gun laws, but in the 2021 federal election, Trudeau promised to go further.

Ray Liotta, the actor known for his roles in 'Field of Dreams' and the Martin Scorcese mob classic 'Goodfellas,' has died.

A massive Russian plane that was grounded at Toronto Pearson International Airport back in February is racking up a substantial parking bill.

Ukrainian Prime Minister Denys Shmyhal says the West must not give in to Russian pressure to ease sanctions in order to restart the flow of agricultural exports.

Amber Heard told jurors Thursday that a harassment campaign waged against her by ex-husband Johnny Depp has left her humiliated and scared for her life from multiple death threats, and said she just wants 'Johnny to leave me alone.'