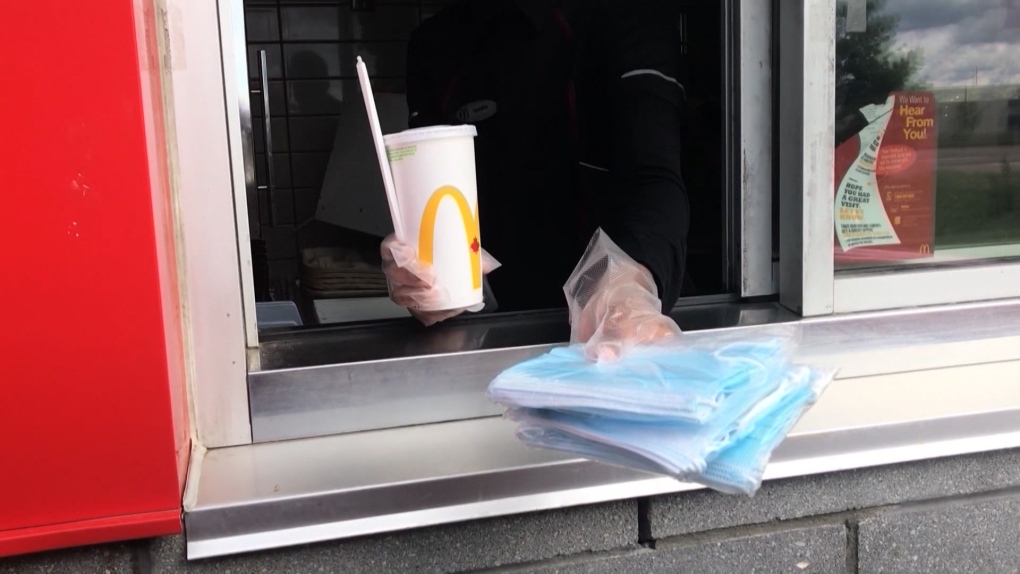 EDMONTON -- Albertans are questioning the distribution of the free non-medical masks through fast food restaurants after people have received more than 10 times the government allotment.

Drive-thrus can give individuals up to 10 packs of masks if requested for family and friends, but some drivers say they've been given more than a dozen packs of masks in one bag.

I'm not exaggerating at all. They are literally tossing as many masks as possible to customers to get rid of them ASAP. I was confused at first, I though they gave me a few individually wrapped ones. No. 10 packages of 4 I got with 1 coffee. https://t.co/0UAjR4GoLO pic.twitter.com/y1wvu9RoHR

I just went to a @TimHortons in #Yeg and they handed me about 15 packs of masks. The woman could barely hand them to me. I said I didn’t need that many & she then asked how many I needed. I said 2. The car before me took dozens of packs. Not enough people are going to get a mask

"We have to operate on the honour system, and I think if we find the rare situation where somebody decided not to do that... look, I think most Albertans can be trusted," said Health Minister Tyler Shandro.

Some are calling the distribution method of drive-thru only 'discriminatory,' saying it's leaving out those without vehicles.

Anyone who has been given waaaay too many masks by the weird #Alberta #drivethru #Mask initiative pls consider donating them to those who don't/can't drive or can't get masks another way.
Many restaurants seem to be giving out handfuls for some silly reason.#yyc #Yeg #COVIDAB https://t.co/sXcQJFHzba

Albertans are advised to ask a family member, friend or neighbour to pick up the free masks for them, or to call 211 for help.

"It is legit to ask for and receive more than one kit if they are actually pass them on as a courtesy to their neighbours and friends, but obviously if people are just hoarding those that would be very disappointing," said Premier Jason Kenney.

Alberta Health confirmed there is no one-pack limit for masks per vehicle, and said drive-thrus should only be providing as many packs as drivers are asking for.

The Alberta Government has promised to provide 20-million masks to more than 600 Tim Hortons, A&W, and McDonalds locations. The Government has a stockpile of 20 million more masks, but has not yet decided how it will distribute them.

An earlier version of this story stated there was a limit of one pack of four non-medical masks per person. Alberta Health has since confirmed the limit is 10 packs per individual.