'Albertans will pay more for less': Campaign aims to keep RCMP in Alberta 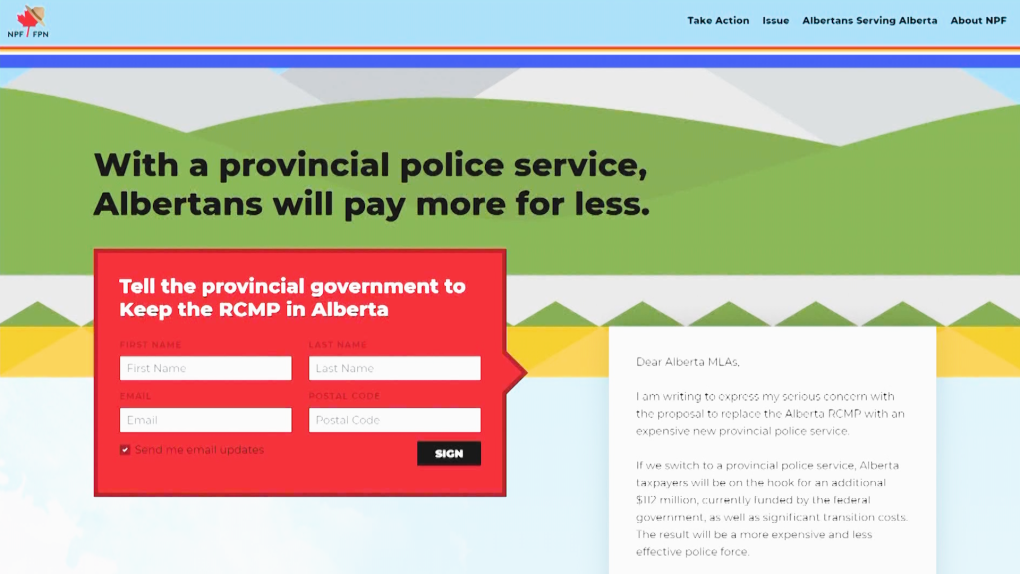 A campaign to encourage the province to keep the RCMP in Alberta. (www.keepalbertarcmp.ca)

EDMONTON -- The National Police Federation (NPF) has launched a campaign to encourage the province to keep the RCMP in Alberta as the government explores the possibility of a provincial police force.

The campaign is focused on showing Albertans the good that the RCMP does for the province.

“Crime rates are down in a lot of rural communities, quality of living is up and all of that is done on a shoestring budget,” said Brian Sauve, president of the National Police Federation.

The move comes as the province is set to receive the results of an independent study on transitioning to a provincial police force in April.

A statement from the Justice Minister’s office said “though the Fair Deal Panel, Alberta’s government heard loud and clear from rural residents who expressed legitimate frustrations with the level and quality of police services in their communities.”

According to Sauve, the NPF has done polls in Alberta and found that a majority want the RCMP to stay.

“Rural communities seem extremely satisfied and just want some improvements, they don’t necessarily want to move away from the RCMP,” said Sauve.

“Why go down a multi-million, possibly billion, dollar project to change something that you can already improve upon at a minimal fraction of the cost.”

Sauve said there is already framework in place to “change, modify and alter or improve service delivery.”

The NPF has had conversations with the province on the potential transition to a provincial police force. They said the province has been receptive to hearing their thoughts.

“We’ve had some very good discussions with them and I think we’ve provided some very in-depth things for them to look at to provide a full transition report with thoughts that the average observer or the average transition team may not consider.”

Currently the federal government pays for around a third of Alberta's policing costs, around $112-million.

The independent study began in October and is expected to be completed by April 30.

The government has pledged to leave the final decision up to a referendum if they decide to move forward with a provincial police force, according to Sauve.