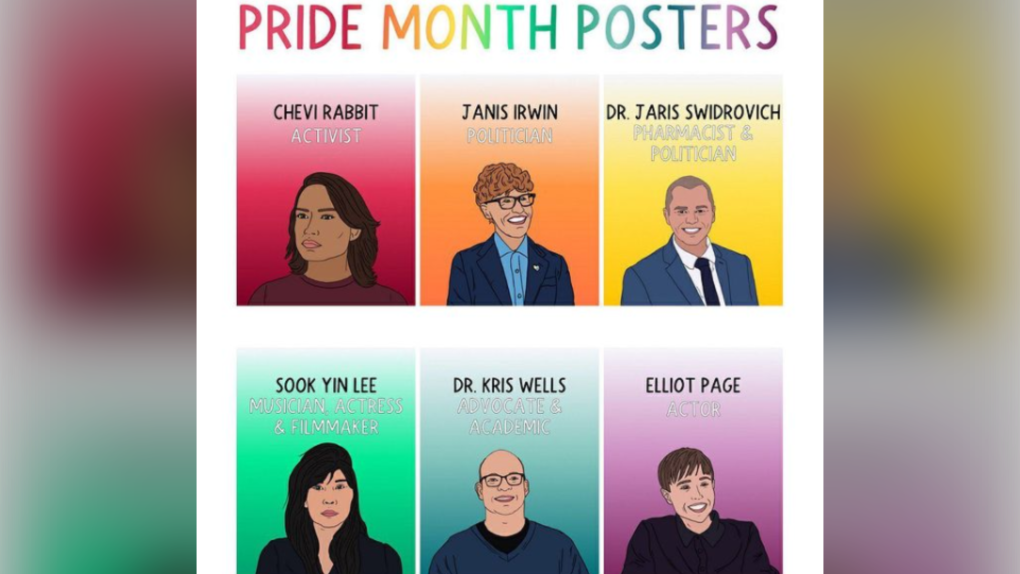 EDMONTON -- A series of colourful posters helping celebrate pride week are being used to showcase inspirational Canadians from the LGBTQ2S+ community.

Created through a collaboration with the Edmonton Catholic Teachers Gender and Sexuality Alliance and artist and educator Megan Tipler, 30 different posters featuring local activists, athletes, and actors are being showcased.

A biography comes with each poster to help educate people about figures often overlooked when considering Canadian history, Molloy said.

“Pride month is all about being seen,” said Tiff Pino a co-chair for the Edmonton Catholic Teachers GSA. “We’re hidden a lot of the time, unless you specifically say something it is something that can slip under the radar."

For Pino, the project is meant to help celebrate pride but also to educate, inspire, and provide better representation.

“Having these great role models of our current Canadian culture just be present and proud of who they are is so fantastic. But then it also opens up and allows other people to be who they are and become role models themselves in their own communities."

While the decision on what 30 people to highlight through the posters was difficult, Pino said the group tried to highlight as many people representing different diverse communities.

“We tried to cover as many as we could because we wanted that to be celebrated as well and inspiring to our students to give them an idea of what can happen in their world too, because sometimes they don’t see themselves in those roles.”

“There isn’t a lot of diversity sometimes in our classrooms for specific communities,” Andi Molloy said, a co-chair for the Edmonton Catholic Teachers GSA. “So for them to be able to see themselves is pretty awesome.”

The Edmonton Catholic Teachers Gender and Sexuality Alliance helps build safer experiences for students and staff within the district while ensuring schools are as inclusive as they can be.

While the posters are created by teachers for use in classrooms, anyone can purchase the collection for $10 to display and learn while supporting a good cause.

A portion of proceeds raised during June will be donated to the CHEW project.