OTTAWA -- Federal beef inspectors at the XL Foods plant in southern Alberta whose E. coli crisis sparked the country’s largest meat recall were ordered to turn a blind eye to contamination on carcasses being processed for sale to Canadians, CTV News has learned, a directive that was imposed by the inspectors’ supervisors lasting four years.

The 2008 memo written by a Canadian Food Inspection Agency (CFIA) meat hygiene supervisor at the Brooks, Alta., plant, obtained by CTV, instructed CFIA inspectors stationed at one of the plant’s final inspection stops to give extra scrutiny to carcasses shipped to Japan, but to ignore visible fecal and intestinal contamination on meat for Canadians.

“Our number 1 priority is to ensure this standard is met with Japan eligible carcasses,” the memo said of the inspection station.

“Ensure that non-Japan-eligible carcasses are not inspected for spinal cord/dura-mater, OCD (other carcass defects) and minor ingesta,” the note continued. “Ignore them.”

The union representing workers at the Brooks plant says this practice is “ridiculous.”

“No disrespect to Japan, but what about the rest of the human beings in the world? It’s like we’re second class citizens,” he said.

The CFIA memo added that the contaminants can be detected later on in the meat-processing process, something with which the union representing CFIA inspectors disagree.

“What (the CFIA memo) is saying is that for non-Japan-destined carcasses, don’t worry about seeing minor defects and that the problem will be picked up later on,” Agriculture Union president Bob Kingston. “But the problem with that is it’s at the end of the inspection line. If it’s not dealt with there, nobody is going to.”

CFIA management says meat products in Canada are safe to consume and insists feces and intestine splatter were being caught.

“If by chance it passes through that point, there are other steps beyond that which we call intervention which will take care of these particular things like remnants of organs and feces,” said Dr. Harpreet Kochhar, CFIA’s executive director of western operations.

“There is a de-contamination shower and then further to that, there are anti-microbial sprays” that carcasses go through, Kochhar said.

But the showers, front-line inspectors say, only remove non-visible bacteria and will not remove feces and intestine splatter.

A senior CFIA official -- who requested anonymity -- told CTV News the high-speed lines should have been stopped immediately. “Any visible contamination is required to be trimmed off,” the official said. “It is not allowed to be washed off.”

“When you ignore the standard and allow that type of material to contaminate beef and go past the final inspection station, you put Canadians’ health at risk,” Malcolm Allen said. “To find out it was indeed a directive -- and not just a question of someone’s willfulness or was lazy and didn’t bother to do it -- but they were directed to ignore it, that is an indictment of the system and the leadership of CIFA.”

O’Halloran with the plant’s union agrees: “There’s no reason for fecal matter to be on the beef once it leaves the kill floor. It should be completely non-contaminated. . . . For CFIA to say that we’ll catch it down the line, it’s ridiculous.

“We’re talking about actions here that are criminal in nature because they could affect people who eat product to die,” he said. “This was criminal on what they were allowed to happen.”

CFIA issued a new memo two weeks ago no longer telling their inspectors who spot contaminants on the production station to “ignore it.”

“Inform QA and/or Production for ingesta identified,” read the new instructions, dated Nov. 16. “If no one is available production would have to be halted to have the defect removed.”

Agency management says the revised memo was “more prescriptive” and was written to ensure “there is no confusion.”

“That was something that was brought to our attention that there might be a confusion,” Kochhar said of the previous note. “We had to re-write it because we had to provide more clarity.”

XL Foods was involved in a massive meat recall prompted by an E. coli scare at its Brooks, Alta., plant. A strain of the bacteria linked to XL has made 18 people in four provinces sick, the Public Health Agency of Canada said.

Last month, JBS USA, a subsidiary of a Brazilian-based company that calls itself the largest animal protein processor in the world, took over management of the plant.

Responding to the CTV report Thursday, the CFIA said the memo was misunderstood, and the instructions regarding both the Japan-bound meat and the non-Japan-eligible carcasses simply referenced a “division of labour” related to tasks at the XL Foods plant.

“The CFIA ensures that the same stringent food safety standards are applied to domestic and exported products. This was the case four years ago and it remains true today,” a statement issued Thursday read. “Within meat plants, there are specific inspection tasks conducted at various stations and production points in production. The memo referenced simply emphasized this division of labour.”

Meanwhile, federal Agriculture Minister Gerry Ritz – who is responsible for CFIA oversight -- came under a barrage of criticism during question period Thursday, as opposition MPs accused him of willful negligence and some demanded his replacement. For his part, Ritz insisted food safety was never at risk. 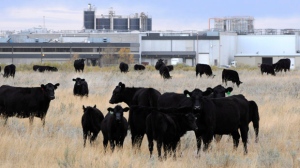