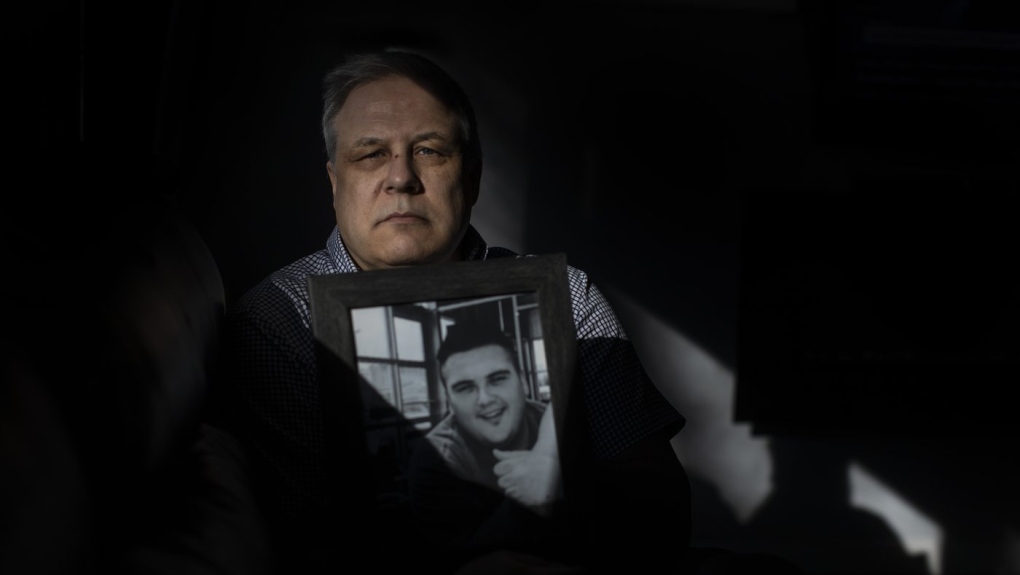 Ray Corbiere holds a picture of his son Joshua Corbiere in Edmonton on Wednesday, March 16, 2022. A father's hope turned to pain in less than 24 hours after his son entered a residential drug treatment facility and fatally overdosed. THE CANADIAN PRESS/Jason Franson JASON FRANSON

A father's hope turned to pain in less than 24 hours after his son entered a residential drug treatment facility and fatally overdosed.

"Our son died in a place that was supposed to be safe," Ray Corbiere told The Canadian Press. His son Joshua was 25 years old.

"He was trying to change his life. He wanted to kick this addiction."

The young man died while seeking treatment at Thorpe Recovery Centre, east of Edmonton. Corbiere said he checked in just before 11 a.m. on Aug. 18 last year and by the next morning he was dead.

"He was all alone and he was my baby," said Corbiere, holding back tears.

Corbiere said he has been fighting to get answers from Thorpe about his son's death, but he has uncovered little about where the drugs came from and what happened when Joshua was found unresponsive.

"There has to be more or better help out there to get these kids through this because they deserve to live."

But those working on the front line said there has been an increase in overdoses — fatal and non-fatal — in these settings, as well as in homeless shelters and the streets.

Dr. Bonnie Larson, a physician and University of Calgary professor, said studies suggest between 40 and 60 per cent of individuals return to drug use after attending inpatient treatment programs for substance use.

"We're corralling them into a death trap," said Larson. "You're being steeped in a tea of abstinence and you're not given any other options."

Government statistics on overdose fatalities are months behind, with the latest showing about 1,400 deaths between January and October last year. Through her front-line work with vulnerable patients, Larson said the crisis has worsened since then.

Addictions specialist Dr. Monty Ghosh, an assistant professor at the University of Alberta and University of Calgary, said there has been a strong push for treatment agencies to provide opioid agonist therapy, which helps reduce cravings and withdrawal symptoms.

With the exception of three agencies, most in Alberta provide suboxone to treat opioid disorder, Ghosh said. Some facilities provide methadone, which also helps with chronic pain.

Until recently, Ghosh said there was limited public funding available for these programs. He added many agencies are shifting away from an abstinence focus.

Jacob, who went to a treatment centre in Calgary and now lives in a recovery house, said it can be difficult to know when someone is in trouble, given the privacy of sleeping quarters or showers in those places. He said it can be too late to reverse an overdose by the time a person is found.

The Canadian Press has agreed not to publish Jacob's last name for concerns on how it could negatively affect his recovery.

David Lewry, executive director of Freedom's Path Recovery Society in Calgary, said there are often strict, and what he considers arbitrary, rules at these facilities that increase risk because residents are afraid to be kicked out.

The drug poisoning crisis has also worsened for those sleeping rough or in shelters, said Calgary outreach nurse Rachael Edwards.

She said she has responded to more overdoses on the streets recently than in her entire 14-year career.

"You go to work and you're in this hypervigilant state waiting for the call that somebody has been found dead in the bathroom," said Edwards.

Those working directly with individuals who use drugs said Alberta's focus on recovery is further stigmatizing this vulnerable population and prevents more robust supports.

Kinnon Ross, an Edmonton-based harm reduction nurse, said recovery should not mean abstinence but any step that improves someone's quality of life, whether or not they continue using substances.

"This has become a moral situation where if you're not abstinent, then you're not worthy of support and care," she said. "That is just so wrong."

Ross said expanding treatment is insufficient because people are thrust back into life as it was when a program ends.

That's why she said the government needs more supports to improve broader determinants of health, such as housing and mental health care.

This report by The Canadian Press was first published March 17, 2022.