Do you recognize them? Alberta RCMP use facial reconstruction to spark tips in missing persons cases

EDMONTON -- Alberta RCMP are hoping facial reconstruction technology can help them identify three people whose remains were found over the past four decades.

Renderings from three of the current 49 cases of unidentified human remains in the province were presented at the RCMP's 'K' Division Headquarters in Edmonton Wednesday.

One of them portrayed the face of a woman believed to have been between 23 and 40 years old when she died. Her remains were found in Carbon, Alta. in April 1995 and it's believed she died between 1980-1985.

"She may be or appear to have been of north African ancestry or possibly of Indigenous or mixed ancestry," said Staff-Sgt. Jazon Zazulak.

The woman stood about 5'0" to 5'3" tall, had multiple fillings and had a disease called brucellosis, which is not commonly found in Canada.

The man appeared to be of Asian ancestry and was 5'3" to 5'7" tall. He showed some signs of malnutrition or anemia yet had strong muscle development, likely from performing a repetitive motion like rowing, police said.

The final facial reconstruction was that of a female estimated to be between 16 and 30 years old who was found near Hinton in 1985. It's believed she likely died in 1975 or earlier. While the woman is believed to be Indigenous, no other details are known, investigators say.

"It is important to note that the reconstructions and sketches are based on best estimates, age of death, ancestry and other characteristics," said Zazulak. "We don't know the circumstances of how these individuals came to be where their remains were found." 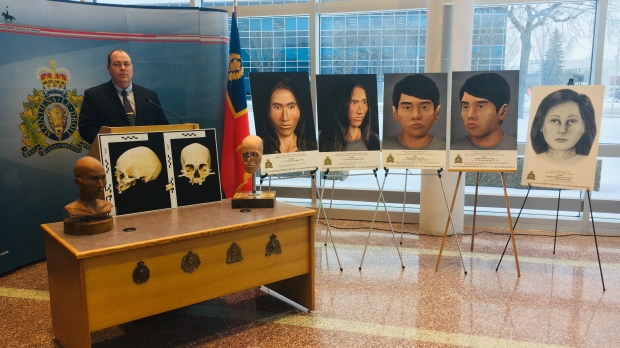 Police are sharing the cases not because there is anything particularly unusual about them, but because the reconstruction work was complete and they felt it was timely to get them into the public eye.

They also want to raise awareness of the familial DNA index, part of a national DNA databank that includes a missing persons index and human remains index used to help solve similar cases.

Anyone with information on any of the three cases is asked to call local RCMP or visit www.canadasmissing.ca.