EDMONTON -- Residents were forced out of a south side apartment building after an early morning fire on Monday.

Dozens of firefighters responded to Strathmore Manor at 2911 109 Street at around 3:30 a.m. after reports of alarms ringing and heavy black smoke.

Officials tell CTV News Edmonton that the fire broke out in a suite on one of the upper floors and spread to the roof.

Travis Kletzel lives in the building. He woke up and saw flames outside his apartment window.

"The first instinct, I said let's just get the heck out of here and leave everything," Kletzel said.

There is extensive water damage and some smoke damage, but the fire was contained to one section of the building. It was considered under control by 3:44 a.m.

According to Edmonton Fire Rescue Services, the damage was limited to a few suites thanks to some well-designed fire breaks.

One firefighter had minor injuries and was taken to hospital. None of the residents reported injuries.

The cause of the fire is under investigation. According to Edmonton Fire Rescue Services, 170 residents have been displaced by the fire. 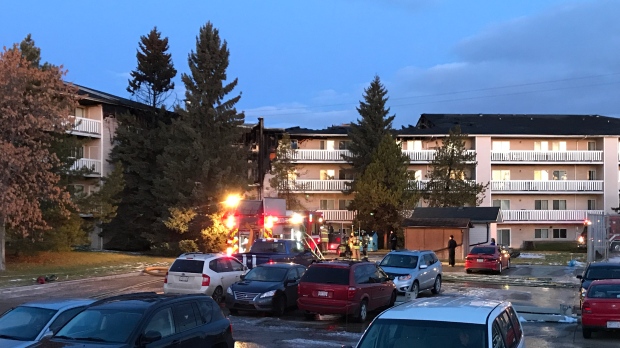