On the fifth anniversary of its opening, Edmonton's Walterdale Bridge is considered a defining feature of the city's international image and a testament to the designers and city council behind it.

The first commuters to cross the North Saskatchewan River via the new Walterdale Bridge did so in the early hours of Sept. 18, 2017.

The sun had not yet risen, nor had the surrounding road rehabilitation and landscaping been finished, and the bridge's arch was darker than Edmontonians are now accustomed to.

But, Edmonton's current deputy city manager of integrated infrastructure services was instantly confident of one thing.

Laughlin was a member of the city team tasked with replacing Edmonton's first Walterdale Bridge – built in 1913 – and led the department that ultimately delivered the new river crossing. 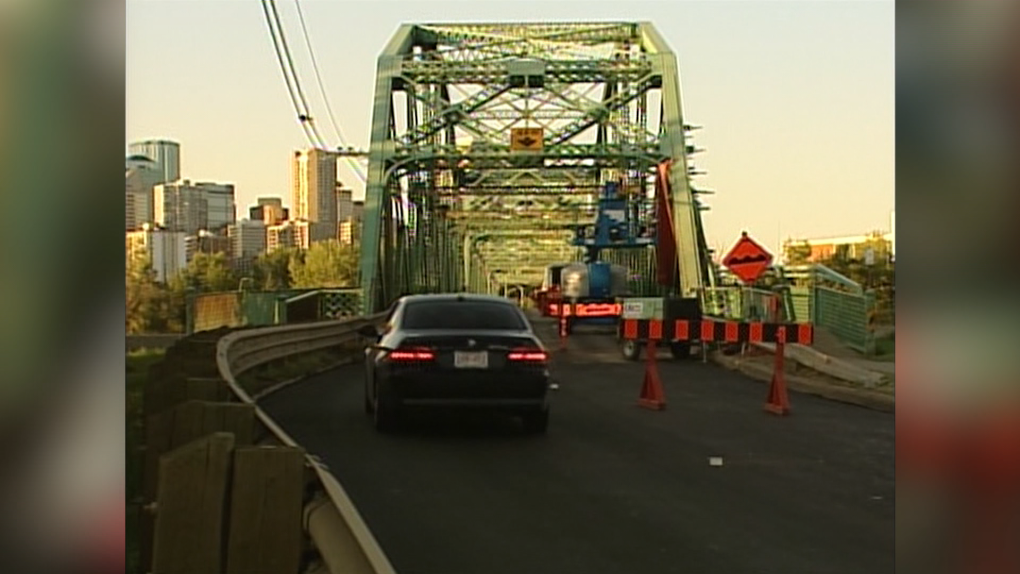 The first Walterdale Bridge was built in 1913. (CTV News Edmonton)

He credits Edmonton's council, then under Stephen Mandel's leadership, for giving his department the latitude to be creative.

Jim Montgomery, the project's lead designer and engineer, was aware of the significance of his job.

"If you go to New York, you think of the Brooklyn Bridge. … Vancouver, the Lions Gate Bridge. People recognize cities for the bridges," he told CTV News Edmonton.

Before his team at Dialog sat four options: a traditional girder bridge; a cable-stayed bridge; an extradosed bridge, whose cables, unlike the previous option, would support less load; and an arch bridge.

Council was already leaning away from the first. Montgomery feared a cable-stayed bridge with a higher tower would overwhelm the river valley.

And so it was decided to replace the three arches of the original Walterdale Bridge with just one, 230 metres long and 56 metres tall. 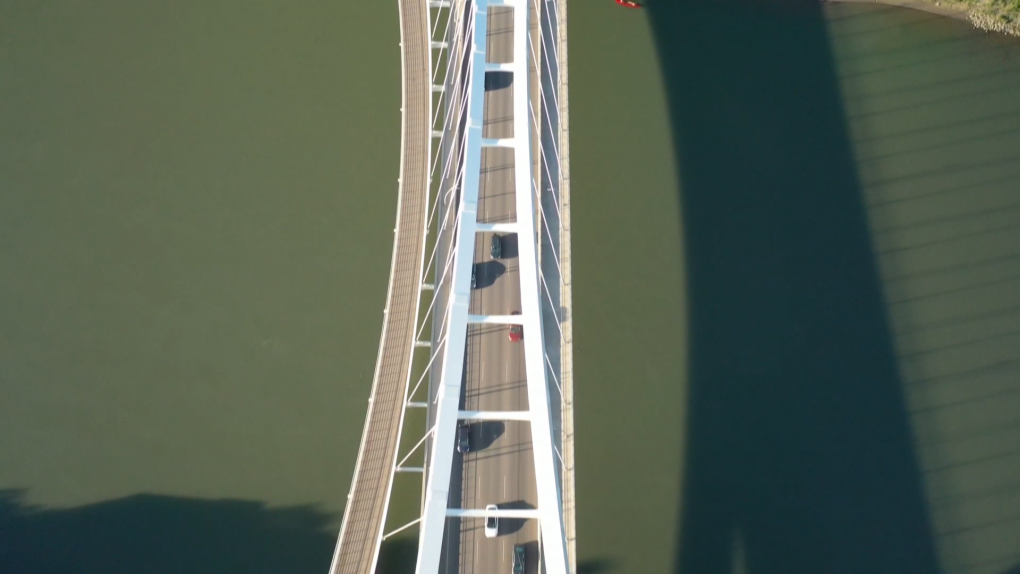 The new Walterdale Bridge from above. (CTV News Edmonton)

Construction started in 2013 and was originally scheduled to wrap up in 2015. But 2015 came and went, with weather and shipment delays pushing back the project and racking up penalties for the contractor.

Finally, by the fall of 2017, the bridge's third lane, sidewalk and shared-use paths were open.

The original bridge was demolished over the rest of the year.

'IT'S A SEXY BRIDGE'

Montgomery calls the new Walterdale Bridge, which ended up being a $155-million endeavour, one of his favourite projects.

"I’m very proud of the way it announces the downtown and attracts people to the river valley," he told CTV News Edmonton.

Each day, hundreds – and in the warmer months, thousands – of pedestrians and cyclists pass by a city counter at the south end of the bridge. Usage for 2022 peaked in July, when the city system counted more than 17,800 cyclists and 5,300 pedestrians. 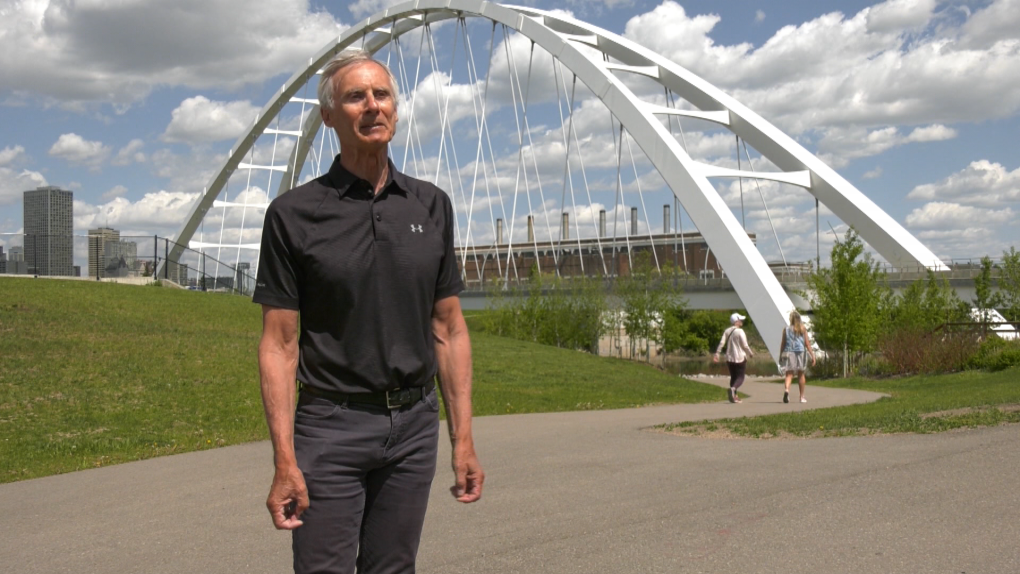 Another said, "I like the visual beauty of the bridge. You know, it's aesthetically pleasing for people that walk across it. We walk across here lots – every day, basically."

"As a friend once said, it's a sexy bridge," local photographer Keith Moore laughed. 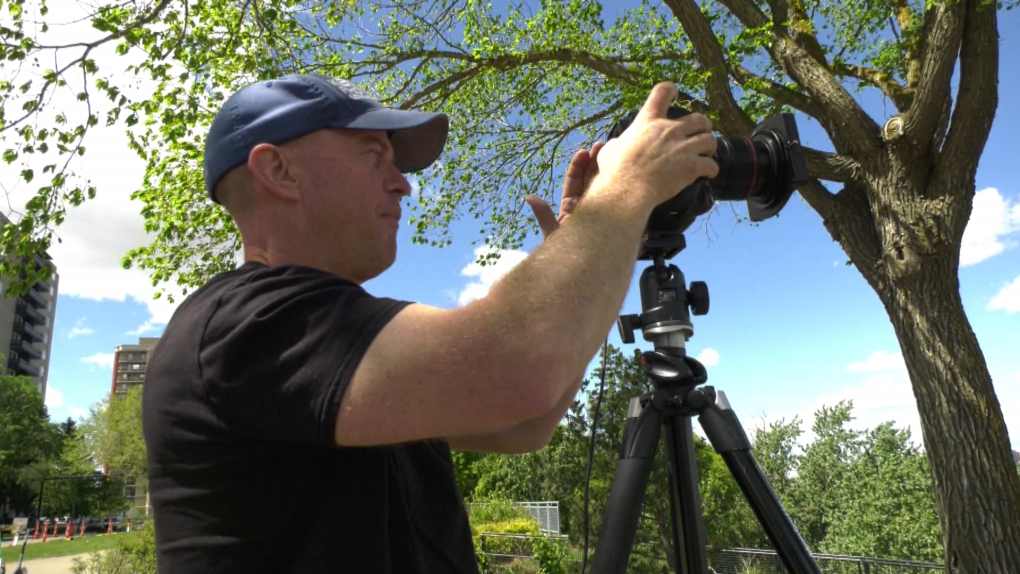 Keith Moore, a local photographer, said a photo of the Walterdale Bridge is his best-selling image. (CTV News Edmonton)

At the centre of his best-selling image is the new Walterdale Bridge, its white frame contrasting Edmonton's downtown skyline and a dusk sky.

The photograph – featured on his Twitter page – boosted Moore's photography businesses. He believes people love it for its portrayal of Edmonton's river valley's transformation.

"The hill on your way down on Queen Elizabeth Park Hill, that used to just be exactly that – a hill. And now you come down here any night, and there's people watching the sunset, people hanging out during the day, picnicking. Everybody's using the river valley with the trails," he said. 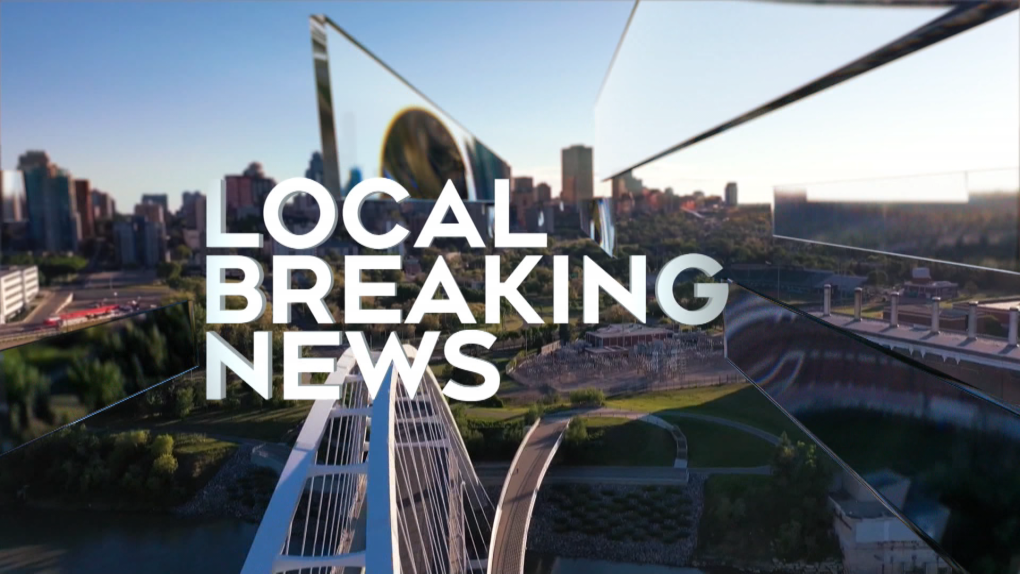 "It's such a welcoming bridge, an exciting bridge that not only looks good on TV but it actually looks way better in person."