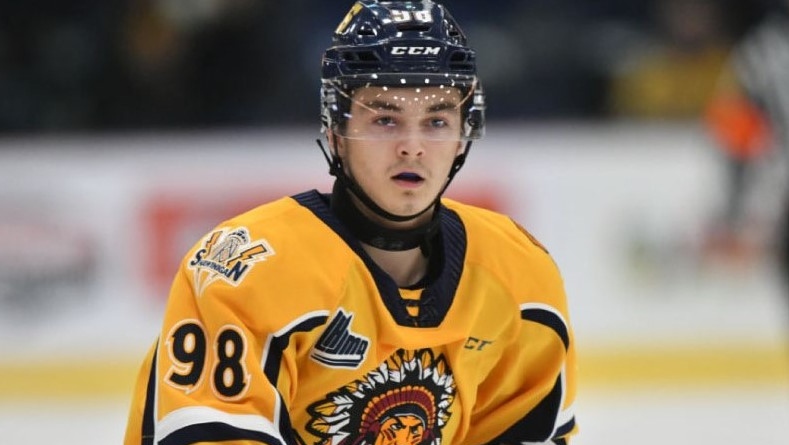 The Edmonton Oilers' newest prospect was nearly at a loss for words Friday night.

The club took Xavier Bourgault with the 22nd overall pick in the NHL entry draft and the French-Canadian felt he'd found his perfect home.

“I can't describe the feeling right now,” he said. “I'm so happy to be drafted by the Oilers.”

Bourgault, a six-foot, 172-pound centre, said he had a good feeling about Edmonton after his pre-draft interview, and he believes it's a team that will help him grow into an NHL player.

Bourgault came into the draft as the No. 13-ranked North American skater after tallying 40 points (20 goals, 20 assists) in 29 games for the Shawinigan Cataractes in the Quebec Major Junior Hockey League last season.

“He's a high-skilled offensive player,” said Tyler Wright, Edmonton's director of amateur scouting. “He can player centre, he can play the wing. He's got good size, he's got excellent vision, excellent skill. He's a student of the game.”

The Oilers originally had the No. 20 pick in Friday's first round but dealt it to the Minnesota Wild for the 22nd and the 90th.

The Oilers finished second in the North Division last season with a 35-19-2 record but were swept from the first round of the playoffs by the Winnipeg Jets.

Edmonton used the 14th overall pick on centre Dylan Holloway at the 2020 draft.

The 19-year-old Calgary native played at the University of Wisconsin last season, putting up 35 points (11 goals and 24 assists) in 23 games.

Forward Xavier Bourgault of the @Cataractes_Shaw has been drafted by the @EdmontonOilers with the 22nd pick! #NHLDraft | #MeetTheFuture pic.twitter.com/s55gsEfC6V

This report by The Canadian Press was first published July 23, 2021.