Orange Shirt Day is an annual display of support and remembrance for the people who were taken from their families and sent to residential schools.

"It's an opportunity to honour the survivors, and those that did not survive, the residential schools," said Leslie Ronaldson, executive director of the Society for Safe and Caring Schools & Communities. "It's important for everyone to know what happened back then, and it actually wasn't that long ago."

Orange Shirt Day was inspired by a story shared by a former student – her new orange shirt was taken away on her first day of school.

Wearing an orange shirt as part of this program is meant to recognize the harm of residential schools, to serve as an act of reconciliation and to help fight racism and bullying.

Safe and Caring Schools & Communities invites students to participate in a logo contest every year, and the winning submission becomes the official logo for the year and is featured on t-shirts and more.

Grade 11 student Farrah Ochiese won the 2019 contest. She created her artwork in a single class at school. 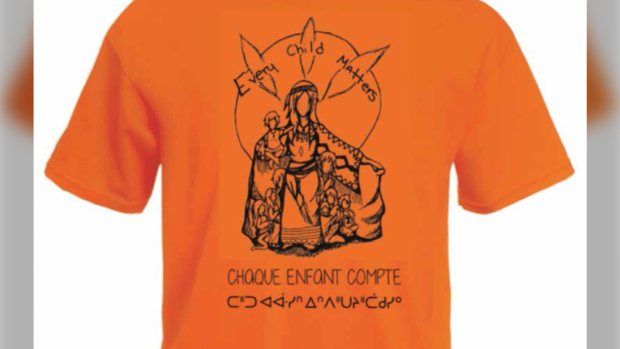 National Orange Shirt Day is Sept. 30.  In Edmonton, an event is being held at City Hall on Sept. 27 at noon.

Mayor @doniveson has proclaimed today #OrangeShirtDay in #YEG.
It is est. 150,000 children of First Nations, Inuit & Métis descent were removed from their families & taken to residential schools. Let us take today to honour the survivors & remember those who perished. pic.twitter.com/5DYmSNC3qU