EDMONTON -- The Edmonton Expo Centre is preparing to take in the city's homeless and vulnerable population after it was transformed into a makeshift overflow shelter.

A city bus with a plastic divider installed to separate the driver from passengers appeared ready to transport people from homeless shelters to the Expo Centre Monday morning.

The Expo Centre is closed to the public as homeless people use it to practice physical distancing amid the COVID-19 pandemic.

City and provincial officials previously expressed concerns for the homeless during the pandemic, as they aren't able to self-isolate unless they have somewhere to go.

The Expo Centre was then earmarked by the provincial government as an overflow shelter last week. On Friday, the City of Edmonton declared a local state of emergency, giving staff the authority to control the movement of people within city limits and direct homeless people to the shelter.

Edmonton has partnered with Homeward Trust and Alberta Health Services to staff the centre.

The centre will have two purposes; part of it will be used for day-to-day drop-in services, between 8 a.m. and 8 p.m., seven days a week. This will allow overflow space for other facilities for the homeless to send people to the Expo Centre, so that people can take appropriate physical distancing measures.

Another portion of the Expo Centre will be used as a 24/7 isolation shelter for people experiencing homelessness who have COVID-19 symptoms to self-isolate. The Boyle McCauley Health Centre will take the lead on this portion of the centre, with support from Alberta Health Services.

Anyone experiencing homelessness with children or pets in their custody will not be allowed in the Expo Centre. The city said alternative arrangements would be made for those individuals. 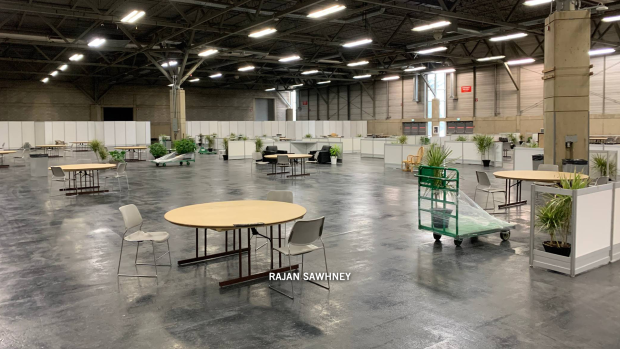 Ontario orders all non-essential businesses to shut down

U.S. approves limited use of chloroquine in COVID-19 fight, but caution still urged

'Knock, drop and go': No more signing for Canada Post packages at the door

Don't take your kids to a playground during COVID-19 pandemic, urges doctor

In global fight vs. virus, over 1.5 billion told: Stay home